San Francisco Audiences Highly Praise Shen Yun: 'Conveys a message that we all need to hear!' 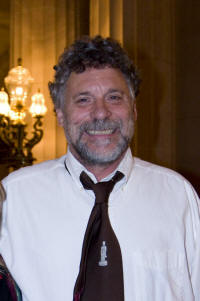 Mr. Summers said he was profoundly touched, "It's just dynamite, really good...uplifting. I think this kind of show is going to have an effect all over the world."

He appreciated seeing China's 5000-year-old traditions presented through Shen Yun's performances and said they could benefit society today. "Discovering the old way...meditation and everything. It's really wonderful and I feel very grateful to be here in San Francisco and right in the middle of it."

Mr. Summers said he felt uplifted after watching the show. "The way in which this show is done is so artistic and wonderful. It's really done well. It connects to the music. . . it's just wonderful!"

As a professional in performing arts, Mr. Summers appreciated seeing the dance performances. "Oh, it's very excellent. The dancing, the footwork, especially the choreography is really top notch...excellent! Particularly the dancing is really good, because of the footwork--all the little subtleties in the footwork."

He was greatly impressed with the full orchestra playing a combination of Eastern and Western instrumentals that produce a unique sound. "The orchestra is fantastic. Sometimes it's really sad and deep, but still uplifting-they're really good. I think she [the conductor] does a really wonderful job of pulling the instruments together."

In conclusion, Mr. Summers said, "It's just very charming, very sweet classically, lyrically. . .the choreography . . . as the show unfolded, I saw the choreography. It was just over the top."

Retired Professor: 'It is indescribable!'

Mr. McCarthy, a retired university professor, and his wife could not say enough after seeing Shen Yun Performing Arts for the first time.

"It was fantastic. I told my wife coming down the stairs that it was . . . the finest performance that I have seen. I have never seen anything like this show. It was just spectacular. Everything gave a message--conveyed a message through it and it was lovely," said Mr. McCarthy.

His wife, Mrs. McCarthy, added; "Oh, the beauty of the dance and the position and the working together, it was really a sense of community and a sense of wealth and possibility and that is what I felt."

Mr. McCarthy emphatically said, "Nobody can afford not to see this show! I think it is that good and just everything about it. It was enough variety but also the continuity of everybody working together was really good."

He felt that seeing Shen Yun would benefit people in today's society, "They dance beautifully and the morality play conveys a message that we all need to hear."

Mr. McCarthy concluded, "It is indescribable! And I would say if you miss it, come and see it next year."

“My Sister and Her Husband's Endless Gratitude”