Chapter I. How many organs can be accounted for by death row inmates?

According to official reports, from 2000 to 2008, the percentage of organs donated for transplant purposes by family members of the patient increased each year. At the same time, the percentage of organs accounted for by death row inmates was decreasing. The number derived from unrelated donors post-mortem remained insignificant throughout. In 1999, family donors accounted for 2% total organ transplants. In 2004, the number was at 4%. [4] In 2006, it had risen to 6%. According to authoritative sources quoted by China Daily, by 2008 and 2009, related donors accounted for 40% all organ transplants, and nearly 60ame from death row inmates, while organs taken from unrelated donors post-mortem accounted for only 130 cases. [5] China's Caijing magazine (No. 24, 2005) reported that "950rgans were from cadavers, almost all of which were executed death row inmates." [6] Life Week magazine reported in 2006, "Control of 98% the sources of organs for transplantation in China resides outside the system of the Ministry of Health." [7] The China Liver Transplant Registration website listed incomplete statistics on liver transplants from 1999 to 2006. Although the total numbers listed were far below the actual number of transplants performed across China, it is useful in showing the percentage of live organs among all organs transplanted, which confirmed that live organs accounted for a very small percentage prior to 2006. [8]

Sources of organs for organ transplantation provided by Chinese officials are shown in the following chart: 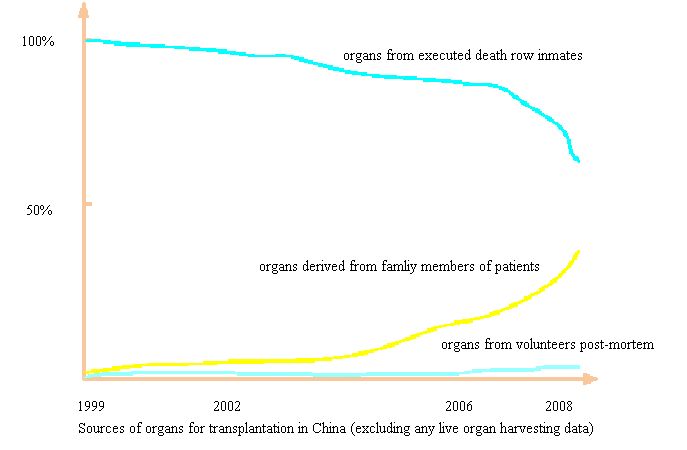 However, the years between 2003 and 2006 were significantly higher in terms of total transplants performed. There were 12,000 to 20,000 cases annually during that period (see details in Chapter V of this report). This cannot be explained if executed death row prisoners were the only source.

Economist Thomas Rawski from the University of Pittsburgh conducted a study in 2000 on China's GDP statistics. Based on public data released by the Chinese Communist Party (CCP), China's accumulated GDP growth was 24.7 0uring the three years between 1998 and 2000. However, energy consumption decreased by 12.8 0uring the same period. Rawski thought this was impossible. He concluded that the CCP falsified the GDP numbers. Despite the controversy over this study, one thing is clear: The CCP has not been able to produce falsified numbers without introducing inconsistency. If we study the official data, it is possible to reveal the CCP's contradictions.

2. Numbers based on an "estimation formula"

The estimation formula is as follows:

We based our estimate on kidney and liver transplants because China's transplant experts often only consider these two organs when providing data. In fact, transplants of other organs are relatively rare. Therefore, the kidney and the liver are the most useful indicators for our purposes.

The variables in our estimation formula are based on an assortment of publicly available data. At the outset we made assumptions about the total number of annual executions of death row inmates.

The result indicates that the maximum number of organs (kidney and liver) derived from executed death row inmates annually is approximately 6,750. This correlates well with historical data. As mentioned earlier, between 2000 and 2002, and again in 2008, this number ranged between 6,000 to 6,500. Since our estimate used the upper limits of the variables, our result is quite reasonable.

Explanation of variables in the estimation formula

1) "Percentage of organs suitable for transplant in an individual"

An executed death row inmate can supply two kidneys and one liver (with other organs out of consideration in our current calculation). However, not all three organs always turn out to be useable. As a special source of organ supplies, death row inmates are executed in different locations or at different times. Without an organ sharing network, even if an inmate has multiple organs for supply, not all of the organs may be used. The newspaper China Medicine stated in the article "Establish an organ transplant registration network" that without such a network, sometimes only kidneys were taken from a supplier while other organs were wasted. [11]

Despite this constraint, we use the 75% value in the above formula to make our subsequent analysis more convincing.

One may wonder why we set the annual number of death row inmates executed at 10,000 instead of 20,000, and why we set the percentage of death row inmates executed whose organs can be used at 30 0nstead of 500r 80%. This will be analyzed in more detail later. At this point we will look at the issue of organ matching because it is an important factor in one of the variables of the formula.

“Executive Dance Director: "This was a joyous occasion for me." (Photo)”