(Clearwisdom.net) On the afternoon of January 29, 2010, Shen Yun supporters protested in Washington DC outside the Hong Kong Economic and Cultural Representative Office (HKECRO). They called on the Hong Kong immigration authorities to permit Shen Yun Performing Arts to put on its show in Hong Kong. 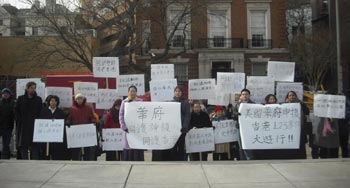 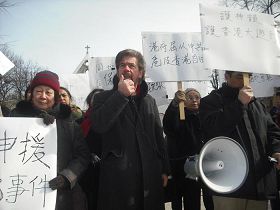 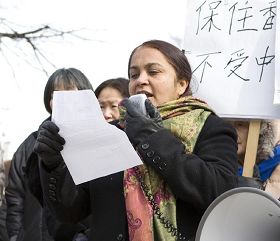 Rally outside the Hong Kong Economic and Cultural Representative Office 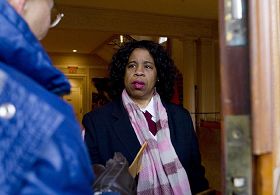 Dr. Lai of the Washington DC Falun Dafa Association hands over a letter to HKECRO and asks the office to pass on the letter to the Hong Kong and Beijing government.

Dr. Lai, representing the Washington DC Falun Dafa Association, handed over a letter to HKECRO. The letter stated, "As one of the hosting organizations of the Shen Yun Performing Arts shows, we are concerned about the forced cancellation, which means that Hong Kong residents cannot watch this world class show. 'One country two systems' is becoming empty words. It is even more concerning that an American art group is being treated unfairly in Hong Kong."

Many audience members of Shen Yun Performing Arts attended the rally in the cold weather.

Responsible for Equality and Liberty (R.E.A.L.)'s Jeffrey Imm spoke at the event in support of Shen Yun Performing Arts, stating that such artistic freedom of expression was a vital way of defending universal human rights. He called for the Hong Kong authorities to change their decision on banning Shen Yun show staff from traveling to Hong Kong, so that they can provide their Chinese cultural show to the Chinese people. He also urged Americans to contact their government officials to address the Hong Kong government on this. He stated that the values of truth, forbearance, and compassion shown in the Shen Yun performance were a key part of values essential to universal human rights, and shared respect for one another.

Maryland resident Liping said, "The Hong Kong government's denial of visas to Shen Yun production staff means that Hong Kong's freedoms are being eroded. Similar to Chinese people in the mainland, Hong Kong people's freedoms are under tight control of the CCP regime."