(Clearwisdom.net) The Hong Kong government yielded to the pressure of the Chinese Communist Party (CCP) and denied Shen Yun Performing Arts' production staff entry visas, resulting in the cancellation of its seven scheduled shows from January 27 to 31, 2010. After hearing about the incident on the evening of January 26, Xiu-Lian Lu, former Vice President of Taiwan, said it was a serious warning to Taiwan.

Ms. Lu said, "Hong Kong has become a Communist regime, so there is no culture or art, just politics. It will suppress whatever is not in line with its political goals. So my reminder is that we won't be able to enjoy what we have now if Taiwan becomes part of China one day. The incident sent a serious warning." 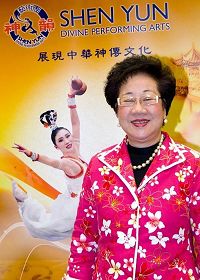 Xiu-Lian Lu, former Vice President of Taiwan, in front of a Shen Yun show poster after seeing the show in February 2009

Chih-feng Su, Magistrate of Yunlin County, felt sorry for the people in Hong Kong and reminded other governments not to yield to what is wrong and to stand firmly on the side of justice. Once a compromise is made, she said, many more will follow, resulting in a setback for freedom and human rights. 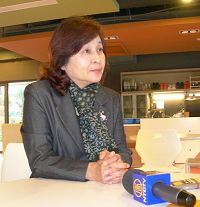 Chih-feng Su, Magistrate of Yunlin County, said the CCP had used up its tricks and felt sorry for the people in Hong Kong

Magistrate Su said Shen Yun Performing Arts was well known around world and that its art of peace, truthfulness, and compassion promoted classic Chinese culture. She looked forward to its presence in Yunlin. She couldn't believe Hong Kong, as a center of international business, would turn away such a top art group.

She added that she thought what the Hong Kong government did must have been because of pressure behind the scenes, that such things would happen only in places under totalitarian rule. Claiming that the entry visas were denied because "these production staff could be found in Hong Kong" was, in her opinion, ridiculous. It showed the CCP had used up its tricks. She felt sorry for the people in Hong Kong because those in power had "harmed Hong Kong's international reputation and lost people's trust."