(Clearwisdom.net) New York-based Shen Yun Performing Arts' seven-show run in Hong Kong, scheduled from January 27 through the 31st, sold out in five days. Then, just a few days before the first performance, on January 21, 2010, the Hong Kong Immigration Department denied entry visas to six of Shen Yun's production staff. Unable to operate the show's complex stage setup without these key staff members, Shen Yun was forced to cancel all seven of its shows in Hong Kong on January 23, 2010. Upon hearing how the Hong Kong District Government complied with the Chinese Communist Party (CCP) regime to suppress the Shen Yun shows in Hong Kong, many people from different countries have stepped forward to condemn the Hong Kong government's succumbing to CCP pressure.

On the afternoon of January 27, 2010, the Japan Falun Dafa Association, The Epoch Times Japan Branch and NTDTV Japan Branch jointly held a press conference in the Foreign Reporters Club to condemn the Hong Kong government's interference. 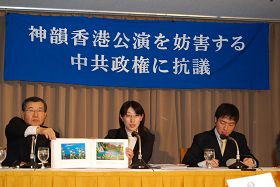 Mr. Kitajima from The Epoch Times condemned the CCP's interference in Shen Yun's tour performances around the world, including the show in Japan. He listed a few CCP's means of the interference: exerting pressure on theaters to cancel a contract at the last minute, sending letters to local governments to defame Shen Yun, and ordering Chinese student or scholar organizations to send emails to their lists and ask them not watch the show.

At noon on January 27, 2010, a rally was held in front of the Chinese Consulate in Los Angeles to protest the interference. 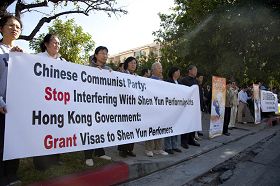 Mr. Zheng Qu of The Epoch Times LA Branch said, "Shen Yun is a world class performing arts production. In the 2009 season, Shen Yun presented over 300 shows in nearly 100 cities in over 20 countries. Audience reaction to the show has been consistently enthusiastic. I have interviewed more than one hundred audience members. An audience member told me Shen Yun brought peace to the world. Mr. Charles Wadswort, founder of a music association in Lincoln Center in New York, used the word 'best' three times to describe the Shen Yun show. Yet surprisingly, the CCP is afraid of the Shen Yun show."

Mr. Frank Tsai, Director of NTDTV LA Branch said, "The CCP's interference in the Shen Yun show is actually censorship. Hong Kong, a Special District claims to enjoy a policy of 'One Country, Two Systems'. But it is not, because the Hong Kong District Government cannot decide key issues, which are determined by the CCP. We regret that the Hong Kong audience cannot view such a good show due to the CCP's interference."

On January 27, 2010, a rally was also held in front of the Chinese Consulate in Sydney, Australia to condemn the CCP's interference. 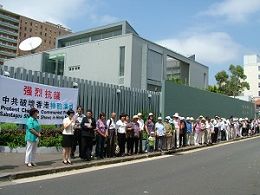 Ms. Zhao of the New South Wales Falun Dafa Association expressed her concern to the forced cancellation. She also exposed CCP Consulate officials' interference in the Shen Yun show in Australia: "They wrote letters and made phone calls to members of parliament, theaters, and sponsors and asked them not to watch the show, support or sponsor the show. But the interference was in vain. The Shen Yun show is becoming more popular in Australia."

Hong Kong resident Ms. Lin gave a speech at the press conference. She condemned the Hong Kong government for its forceful deprivation of Hong Kong people's right to watch the show. She said, "I have seen the Shen Yun show. It is truly world class. The Hong Kong's visa denial means that the CCP's promise of no policy changes for 50 years in the 'One country two systems' is broken. I call on the Hong Kong people to protest the CCP's violent regime." 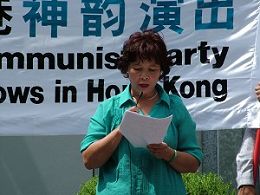 Shen Yun Performing Arts will have tour shows in five cities in Australia this coming May for one month.

“Current Events Are Helping Us to Become More Mature”