Former Congressman: 'I know that the world is a better place because of Shen Yun performances!' (Photo)

"Let me say welcome to you from the Lantos Foundation, I am excited to be here tonight. As mentioned, I have been participating in all of the performances since the beginning of the program three years ago. We have seen tremendous artistic displays, but most importantly I have been very proud to be associated with my father-in-law, [with] the Foundation that was established in the memory of my father-in-law. 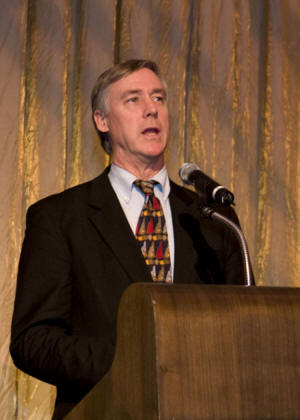 It's a great pleasure to be here tonight with my mother-in-law, Annette Lantos. It's great to have Annette here and hopefully my wife Katrina, who is heading up the Foundation with her mother, will show up a little bit later. But let me just talk one moment about Shen Yun and what I have seen, not only tonight but over the last two years.

These performances that we have seen so elegantly and beautifully described by Congressman Kucinich, are certainly a connection not only between two cultures--between the West here in the United States and all the other countries that [the Shen Yun artists] travel to all around the world--and the Shen Yun group that has practiced so diligently, and so expressively displayed their artistic abilities. What it does is it connects us to a China that many of us in the world would have never known until we met this group.

These are the artistic traditions of an old China--a China that had the principles and the values that so many of us believe in and so many of us have felt so deeply about all our lives. To see the ways that these are portrayed and to understand that we are actually being exposed to a China that many of us have never seen, is, I think, a truly wonderful experience that connects us to that country in a way that couldn't happen in any other form. So it is in my mind, a very special way to make that connection.

It is [due to] an incredibly deep and sensitive portrayal of a wonderful culture that has such valuable traditions and such wonderful principles on which it's founded that I know that the world is a better place because of Shen Yun performances. All that they do will in fact make a great contribution to broadening understanding of the Chinese culture and to reuniting us with that culture as time goes on. Every year they update and include new performances.

I have found this to be a most wonderful and enjoyable evening. So I want to congratulate the Shen Yun cast and all of the producers, and the parents and people who have been participants, in making this possible. We at the Lantos Foundation want to wish you continued success--keep that show going on--the show must go on! And thank you so much for the wonderful spirit that you bring into the world everywhere that you go. Thank you very much!