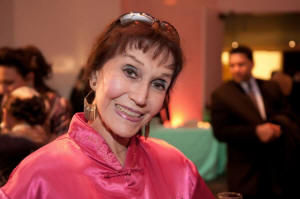 Ms. Traten Fisher, founder and director of State of the Arts Cultural Series

Ms. Traten Fisher was so moved by Shen Yun that she came to see it for a second time. She is the founder and director of State of the Arts Cultural Series, a lunchtime concert series she hosts at the U.S. Department of State. She is also a concert pianist and a painter.

"This is a breathtaking work of art, it is beautifully organized and beautifully structured, and I was especially impressed with the coordination of the colors," she said of Shen Yun's performance.

"I congratulate the director, the choreographer."

She also had high praise for the unique backdrops, saying, "It brought [the performance] to life in a very beautiful way and meshed very well with what was going on on stage."

She enjoyed the dance, Handkerchiefs, "I was intrigued with the handkerchief dance." And she also said she was moved by, Fairies of the Clouds, where the dancers use fans to create a vision of transcendent beauty. "That was so exquisite."

"I was very impressed with the male dancers, I thought they were extraordinary," she said.

"It's sort of a gestalt, meaning, everything, total. The music, the art, the colors, the dance, the choreography.

"The whole thing was a gorgeous work of art. I am so happy that in this day and age, something artistic and creative is being perpetuated, because we need more of this in the world. Because music and the arts, they are the universal language and it is through that, people have peace."

Mr. Danner, a TV producer, cameraman and chair of a native American communications association was at opening night of Shen Yun Performing Arts at the Kennedy Center Opera House on Jan. 19. He was touched by what he saw.

"It's a beautiful show. The choreography, the movement; it was a very inspirational show.

"It was full of hope, full of light, full of love, something that lives on forever, so it was lovely."

Mr. Danner was inspired by the ethnic and folk dances depicting China's various eras and ethnicities, making for a unique vision of Chinese traditional culture.

"It's very difficult to get music and color and the choreography to really work together, and they did a good job on that. They did an amazing job."

To Shen Yun he added, "Thank you, hope you come back again."

Sam Arvidson and his wife Kathy were also in the audience on opening night.

Mr. Arvidson, is a dance director and award winning world champion dancer and choreographer. He started dancing when he was three and was performing at age seven.

"It was a great show. Fantastic!" he said.

"We thought it was awesome. I liked the choreography. The young ladies were absolutely fantastic, they were very delicate."

Mrs. Arvidson agreed with her husband. "I was really impressed with the women. They have a lot of emotion, just the way their arms--you just felt everything that they did--very, very nice."

“Former Congressman: 'I know that the world is a better place because of Shen Yun performances!' (Photo)”