(Clearwisdom.net) On January 9-10, and January 16-17, a grand festival is being hosted at the plaza in front of the Buddha Temple near Guanyin hill, in Kaohsiung, Taiwan. The festival theme is "Jujube and Fortunate New Year." "Jujube" sounds the same as the word "early" in Chinese. The festival is promoting the three major natural products of milk, psidium and jujube of Dashe township, and it also features a Jujube Sweetheart pageant contest that attracted many applicants. Falun Gong's waist drum team and Tang drum team were also invited to the parade on January 9, 2010. 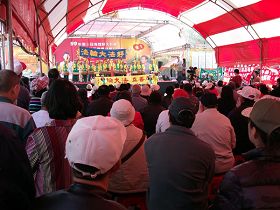 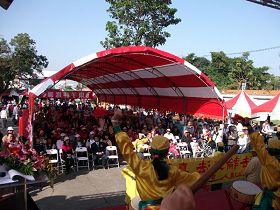 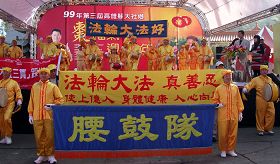 The parade began at 8:00 a.m. starting from the Dashe Township hall. Led by the township mayor, the community and organization processions from all villages marched toward the plaza. The Falun Gong waist drum team and Tang drum team were invited to the parade. The practitioners passed out fliers along the route and promoted Falun Dafa to villagers. Some people said they wanted to learn the exercises, and others asked why Chinese Communist Party persecuted Falun Gong. The practitioners patiently explained to them and cleared their doubts. Arriving at the main festival area, the waist drum team and Tang drum team performed on stage and received warm applause from the audience.

After the performances, the mayor of Dashe Township posed for a photo with the Falun Gong practitioners.

“Reflecting on the Eutelsat Event and the Internet Blockade ”