(Clearwisdom.net) On New Year's Day, Falun Gong practitioners joined the Culture Parade in Bali, Indonesia. Their Divine Land Marching Band, waist drum team, banner team and float were warmly welcomed by the spectators. Falun Gong is a well-known group in Bali and is supported by people from all walks of life. 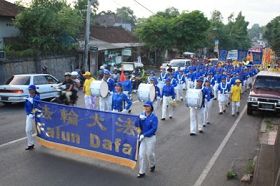 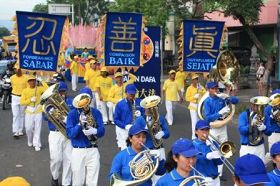 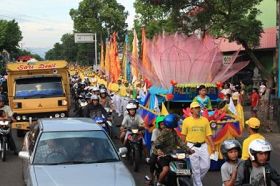 Kadek Raisila, the local contact person for Falun Gong, spoke about the persecution and the organ harvesting happening in China. Mr. I Ketut Suryadi said that the international community should pay attention to the human rights situation in China. "The persecution of Falun Gong clearly violates human rights," he said.

“Germany: Protest Against the Refusal to Renew my Passport at the Chinese Consulate in Frankfurt (Photo)”