(Clearwisdom.net) The Truth, Compassion, Tolerance International Art Exhibition concluded its ten-day exhibition in Sanchong County, northern Taiwan, on September 13, 2009. Many visitors expressed their respect for Falun Gong practitioners' great compassion and tolerance. They condemned the brutal persecution of Falun Gong in China and many said that they hoped that the Art Exhibition will travel to every corner of the world 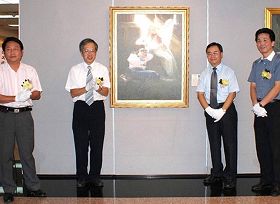 Cheng Xuezhong, Principal of Gubao Home Economics High School, said this was his second time to view the Art Exhibition. Cheng said he was very moved by the vivid paintings. He was happy to see a big crowd at the exhibition and glad to know that many people understand and support Falun Gong.

He encouraged all teachers and students in his school to come see the paintings. He wished more people could see the evil nature of the Chinese Communist Party (CCP) and hopes that such a tragedy as the persecution of Falun Gong will never happen again.

Ms. Chen had recently come from the United States to visit Taiwan. She said that the paintings were exquisite. She was especially impressed with certain paintings, including one depicting Falun Gong practitioners doing the exercises on a busy street in New York City. In this painting, despite the busy surroundings, the practitioners showed great calmness and peacefulness. The little girl in "Orphan's
Tears" made Ms. Chen feel sad and sorry for the children who have lost their parents in the persecution.

Ms. Zhan, a Christian, said she loved the painting "Studying the Teachings." She believes that it is a basic value that one should examine oneself before blaming others. She wonders how many crimes committed by the CCP remain unknown to the world.

"Orphan's Tears" made Zhan want to cry. She said she would pray for Falun Gong practitioners. She believes that the practitioners who died in the persecution will go to Heaven and their acts of justice will be rewarded.

Xiaozi is a freshman in college. She said that the paintings made her feel very relaxed and comfortable. She learned something about how to depict purity and compassion. She had deep feelings about the painting 'The Vow," in which many celestial beings come down to the human world to offer mankind salvation. She believes that everyone has kindness in their heart. 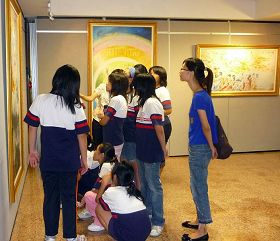 Ms. Dai was surprised to see that the little girl in "Call of Innocence" resembled her own daughter. Also she thought that the mother's face in "Studying the Teachings" was very beautiful, calm and blissful. Ms. Dai was happy and grateful to obtain a copy of Zhuan Falun at the exhibition. She said she would go home and study the teachings of Falun Gong. 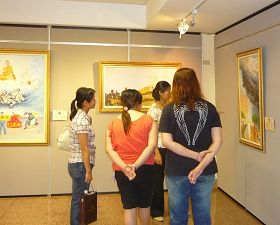 Ms. Dai and her family.

Two sisters who grew up in Canada had just graduated from college in Toronto. After viewing the paintings, the older sister said that she loved the peaceful and beautiful feeling in the painting, "Assimilation of Humans and Heavens." She often had tears in her eyes when she viewed the paintings depicting the persecution.

The younger sister realized the brutality of the CCP and said, "I feel very angry. Falun Gong practitioners have not done anything wrong. The persecution is unjust and baseless. I will tell my friends what I learned today and I hope this persecution will end soon. I will pray for these innocent, kind people."

Because of his daughter's great interest in painting, Chen often takes her to art exhibitions. Chen believes that the painters in the Truthfulness, Compassion, Tolerance Exhibition are very professional and can express beauty at spiritual levels. The flower on the hair of the little girl in "Call of Innocence" represents peace, hope and liveliness. Chen said that the painter expressed certain concepts in subtle ways. He said that he hopes his daughter can pick up such skills in the future.

Ms. Lin comes from the Guangxi Autonomous Region in China. She married a Taiwanese four years ago. She came to the exhibition with several friends. After learning about Falun Gong and the persecution, she understood the evil nature of the CCP. She immediately said that she would go online and quit the CCP and its affiliated organizations.

Ms. Lin said that temples in China have become tourist spots. She said that people have stopped believing in the teaching that good will be rewarded and evil will be punished. She feels that they have become selfish and care about no one but themselves. She prefers living in Taiwan where there is more freedom. Ms. Lin talked about how the CCP played videos defaming Falun Gong on TV around the clock at the beginning of the persecution. "I got so sick of it eventually," said Lin.

“Experiencing the Test of Life and Death”