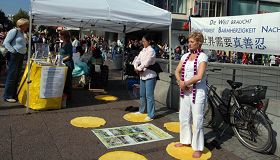 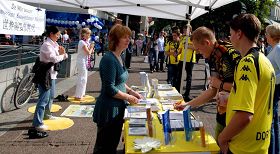 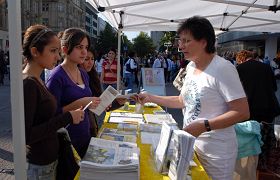 Students listening to the explanation about Falun Gong. 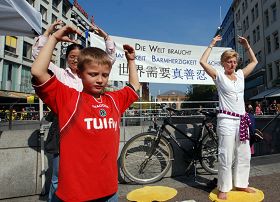 This lady is inquiring about the health benefits of Falun Gong.

At 11:00 a.m. on September 19, many people came to the information desk to ask for Falun Gong materials. The day coincided with an election campaign by the CDU Party and a soccer game.

Attracted by the peaceful Falun Gong exercise demonstration, some Dortmund soccer fans who passed by the square came to the information desk to read posters and sign the petition in support of Falun Gong. Some passers-by even sat down by the desk and started to learn how to make paper lotus flowers. 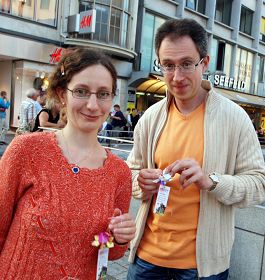 After spending an hour, a couple celebrates success in making a paper lotus flower.

While folding the lotus flower, a German lady had tears in her eyes for the Falun Gong orphans who lost their parents in the Chinese Communist regime's brutal persecution of Falun Gong. She said, "These children are so pitiful. It is really sad." 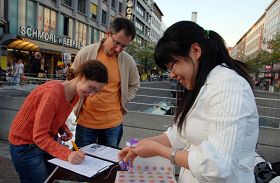 After making a paper lotus flower, people sign petition against the persecution of Falun Gong.

Accompanied by her husband, a young German lady spent a whole hour learning to make paper lotus flowers. In the end, she thanked the Falun Gong practitioner who taught her and signed the petition supporting the Falun Gong orphans.

A lady who lives in Hannover stayed at the information desk for a long time, inquiring in great detail about the health benefits of Falun Gong. She hoped to join Falun Gong practitioners in Hannover to practice Falun Gong exercises.

Having learned the facts, a German lady told a practitioner: "There are many politicians here today. Are they also aware that Falun Gong is being persecuted? You have to tell them the facts as well, and the information about Falun Gong orphans." The practitioner replied: "We definitely will. We will let people from all walks of life know the facts."

A Chinese lady with her daughter and German husband talked to practitioners at the information desk. She told a practitioner that she already announced her withdrawal from the Chinese Communist organisations in Cologne. But she was not quite clear about the significance of withdrawing from the communist organisations and how her relatives in Mainland China could do it.

Lastly the practitioner reminded this lady and her daughter that they also need to tell their relatives in China about this and help them to withdraw from the Chinese Communist organisations. The lady nodded and said she would do so. Before leaving, she asked for a set of informational materials in German for her husband.