(Clearwisdom.net) Ahead of Norway's general election, leaders of each party received a special gift--copies of the Nine Commentaries on the Communist Party, which has been responsible for 60 million people in China quitting the Chinese Communist Party (CCP). The leaders said that this kind of information was very much needed.

Norway's general elections, which take place every four years, kicked off in late August 2009. Each party set up its headquarters, distributed leaflets in Karl Johansgate, and hosted speeches to promote its own political agenda in an effort to gain votes. With the election on September 14 fast approaching, competition intensified. Leaders of each party also came out to give speeches and answer questions.

During the activities, all leaders received a precious gift - booklets and DVDs of the Nine Commentaries, which exposes the evil nature of the CCP and has led 60 million in China quitting the party. The leaders promised that they would read or watch it carefully.

The Falun Gong practitioner who gave out the Nine Commentaries said that the CCP's lies and tyranny have been a horrendous calamity for the Chinese nation for 60 years. "The fact that Falun Gong has been persecuted for ten years is a reflection of the CCP's intolerance of people's belief in Truthfulness-Compassion-Forbearance. To stop the persecution, rid the Chinese nation of misery, and prevent the international community from being poisoned, it is critically important to help people see the true nature of the CCP." 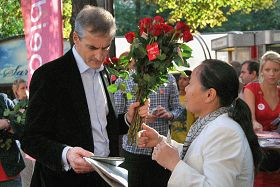 On September 12, a leader of the Norwegian Labor Party, the current Norwegian Foreign Minister Jonas Gahr Støre, spoke at the Labor Party's headquarters. After the speech, a Falun Gong practitioner in Norway offered him the Epoch Times editorial Nine Commentaries on the Communist Party, and a DVD of the same title. He told the minister about the book, which has been translated into over thirty languages, "Sixty million have quit the CCP since the publication of that book and about 50,000 renounce the CCP and its affiliated organizations on The Epoch Times website each day." 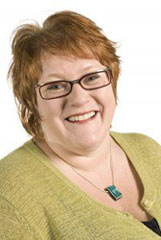 MP Trine Skei Grande, vice president of the Liberal Party and the first candidate for the party in Oslo said, "Many times in Parliament we have raised the issue of human rights abuses to the Chinese government, such as Falun Gong, Tibet, Taiwan, etc., which enraged the regime." 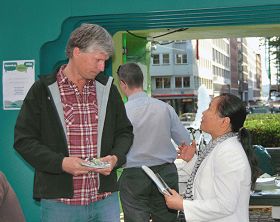 Ula Erwanston talks to a practitioner

Ula Erwanston, the second candidate for the Liberal Party in Oslo, carefully listened to a practitioner's introduction to the Nine Commentaries and thanked her. 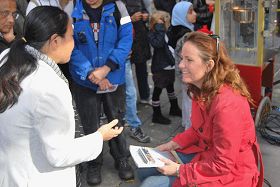 After giving her speech and answering questions, Heidi Sørensen, the third candidate for the Socialist Left Party in Oslo and a State Secretary in the Ministry of the Environment, listened to practitioner's introduction of the Nine Commentaries and about the millions who are quitting the CCP. She gratefully accepted the booklet.

After receiving the materials, other party leaders said that this kind of information was very much needed.

For other party leaders not present, their representatives on site accepted the materials on their behalf and promised to pass them on to those in charge.