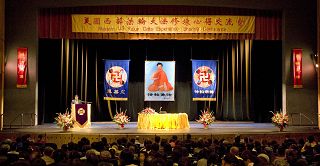 Ms. Niu talked about how she uses the phone to clarify the truth to people in China and helps Chinese people quit the Communist Party. She makes phone calls to China for two or three hours every night. She has convinced many people to quit the party, including workers, farmers, businessmen, government officials, teachers, doctors, students and military personnel. 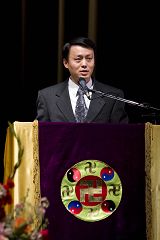 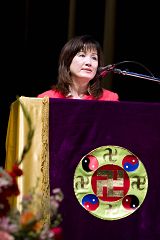 Ms. Yang shared how she started practicing Falun Gong, and how she looks inward when conflicts occur. Shortly after she started practicing Falun Gong, she accidentally scratched somebody's car in a parking lot. Her first reaction was, "Nobody saw it. I should just leave." But then she realized it was wrong and against the principle of Truthfulness. So she found the owner of the car. The owner appreciated Ms. Yang's honesty and decided not to charge her.