Germany: "You must keep going"

On July 25, 2009, Falun Gong practitioners from Germany and Switzerland held an 'information day' in the famous tourist city of Freiburg im Breisgau, which is located in the scenic Black Forest of southern Germany. The event was to introduce local residents to the practice of Falun Gong and expose the Chinese Communist regime's brutal persecution of the practice. 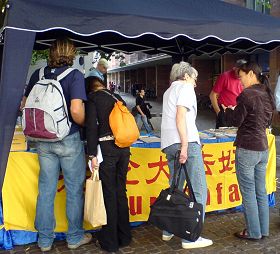 Passers-by learned the truth about Falun Gong at the information desk. 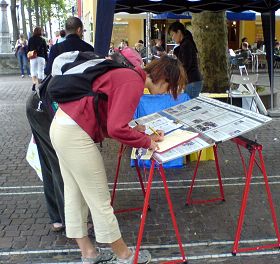 People signed the petition to condemn the persecution 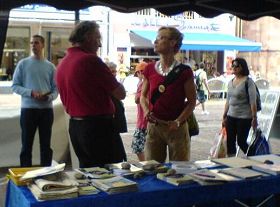 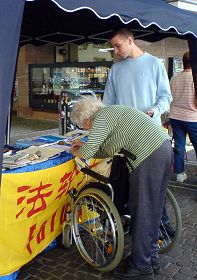 An elderly lady signed the petition to condemn the persecution

After learning that the persecution is so brutal, an elderly lady with walking difficulties came to the information desk to sign the petition in order to show her support for Falun Gong practitioners.

Many Chinese people passed by the information desk and accepted truth-clarification materials. Some decided to quit the Chinese Communist Party, the Communist Youth League or the Young Pioneers immediately.

Many people who learned the truth said that what Falun Gong practitioners have done is great and very meaningful. Many signed a petition to condemn the persecution.