In the morning of August 1, 2009, a "Globally Supporting 58 Million Chinese Who Have Quit the Chinese Communist Party" parade took place on Mazu Island which is the point in Taiwan nearest to China. The Divine Land Marching Band and a Falun Gong practitioner waist drum troupe marched at Nangan Port and North Ganqinbi Village. Their music, including "Falun Dafa Is Good" brought the message of Quitting the CCP to local residents and tourists as well as nearby people from China. 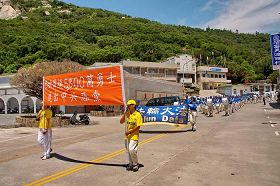 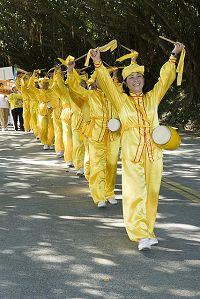 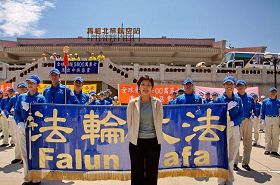 Rally held before the parade

The parade procession included the Divine Land Marching Band, a waist drum troupe, banners and posters which displayed messages of the Global Quitting the CCP movement, and the persecution of Falun Gong in China, which attracted many local residents and tourists who watched.

A group of Taiwan tourists said that they were very lucky to see the parade on Mazu Island. One local resident's view was focused on the posters which revealed the brutal persecution of Falun Gong. He said that several years ago a few local bystanders were photographed along with practitioners in an event. When these people went to China, they were denied entry and deported back. "Evidently, the CCP not only persecutes Falun Gong but also anyone that they view as a threat."