(Clearwisdom.net) On August 16, 2009, Falun Gong practitioners participated in the 40th Mid-Autumn Festival in Boston's Chinatown, and the 2009 Indian Festival in a theater. They introduced Falun Dafa and exposed the Chinese Communist Party (CCP)'s ten-year-long brutal persecution.

There were 130 booths at the Mid-Autumn festival. The Falun Gong booth was eye-catching, and many people came to learn about Falun Gong. Ms. Falma Ujur from Arlington and Ms. Mary Tarshi from Lawrence learned the exercises on the spot with their daughters. They said they would continue to learn at nearby practice sites. 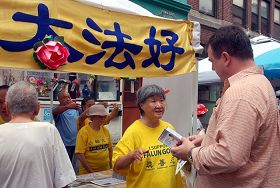 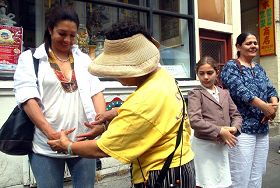 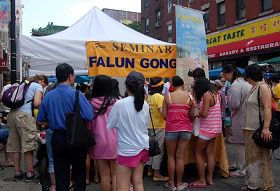 Mr. Tianyu Zhang from China learned the facts about Falun Gong and hoped more Chinese people would realize the CCP's true nature and not be deceived by its lies.

A young man and woman from Nanjing, China came to the booth. The young man said he knew Falun Gong was a good practice, and brought better health. He recommended that the young woman, whose back was in pain, learn Falun Gong.

A Chinese lady whose ancestors were from Guangdong, China said she was interested in Falun Gong. She did not speak Chinese, so she bought the English version of the book Zhuan Falun and said she would like to learn Falun Gong.

At the 2009 Indian Festival, the Falun Gong booth drew the attention of many visitors. People stopped to watch the Falun Gong exercise demonstration, some learned to fold paper lotus flowers, and many learned the facts about Falun Gong. 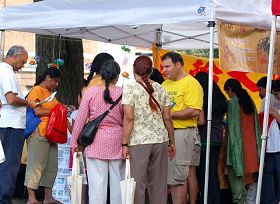 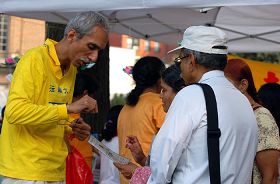 Many people learn about Falun Gong at the Indian Festival

Tony from India said that the lotus is the flower of India, and it symbolizes peace, dignity, and holiness. He knew that lotus flowers grow in the mud but nonetheless thrive. He admired Falun Gong practitioners' uncompromising courage in following Truthfulness-Compassion-Forbearance.