(Clearwisdom.net) In the evening of July 21, 2009, Falun Gong practitioner Mr. Gu Huaibing, a resident of Pi County, Chengdu City, who works part time at a computer company, was arrested by officers from the Tiaosanta Police Station. He was put in criminal detention the next day. Following the rule of law, on August 5 and 6, 2009, Mr. Gu's attorneys requested to meet with him, but were openly rejected by the chief of the Domestic Security Division in Wuhou District. Concerned with the brutal nature of the Chinese regime's persecution of Falun Gong, thirty-three family members and friends of Mr. Gu are urgently calling for Mr. Gu's release. 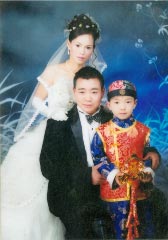 Mr. Gu, his wife and their son.

Below is an open letter from the thirty-three family members and friends:

We, the undersigned, are family members and friends of citizen Gu Huaibing from Pi County, Chengdu City. In early morning of July 22, 2009, we learned that, Huaibing was arrested at work the night before, by officers from the Tiaosanta Police Station. His 11-year-old son was with him and was taken to the police station at the same time. At approximately 3:00 a.m. on July 23, 2009, his son was picked up by Huaibing's brother-in-law at the Tiaosanta Police Station. However, Huaibing was not released. Later the family received a "Notification of Detention" and learned that Huaibing had been placed in criminal detention and was held at the Chengdu City Detention Center.

We were sad and worried. We were compelled to hire legal counsel for Huaibing. The attorneys told us that Huaibing was wronged. He was charged with "Notification of Detention," and accused of "using an evil cult to undermine law enforcement." However, according to the attorneys, such a charge against Huaibing, who is a Falun Gong practitioner, is erroneous. The attorneys told us that under the current Chinese laws, there is not a single article that defines Falun Gong as a cult. Falun Gong practitioners' behavior poses no harm to society, nor do they undermine law enforcement. Huaibing is innocent and should be freed immediately!

Why were the attorneys not permitted to see Huaibing? We are concerned about Huaibing's well being. What has happened to him during the time he has been held in detention? We are worried and we are scared, because we know some Falun Gong practitioners in our area who have been detained in the police stations and detention centers. They have suffered horrible abuses such as brutal beatings, electric shock and other unimaginable torture. We are really worried.

The attorneys also told us that it is unlawful for the chief of the Domestic Security Division to refuse the meeting between Gu Huaibing and his attorney. They have filed complaints.

Huaibing's son will go to middle school this year, his wife is a homemaker, and his elderly father is deaf and needs Huaibing's care. The whole family relies on Huaibing and his income.

Huaibing conducts himself according to the principles of Truthfulness-Compassion-Tolerance. He works hard without complaint, is always willing to help others and is kind to people around him. Huaibing is an extraordinarily good man!

We ask that the Domestic Security Division in Wuhou District and the Tiaosanta Police Station release Mr. Gu Huaibing immediately!

We hope that people lend us a helping hand. Help to uphold the justice and conscience of society by paying attention to Mr Gu's situation. Please help Mr. Gu Huaibing and his family!