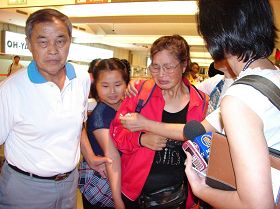 Ms. Shao Yuhua married a Taiwanese and moved to Taiwan from China eleven years ago. In 2007, she started practicing Falun Gong. This past July, Ms. Shao went to visit her family in China with her ten year-old daughter. On July 31, she was arrested by Chinese police.

Several Taiwanese organizations and government officials were involved in rescuing Shao Yuhua. On August 6, she was released and returned home. At the airport, she and her husband, Cheng Shuda, expressed their appreciation to Falun Gong practitioners, the Taiwanese government and to the other organizations that helped secure her freedom.

Ms. Shao said, "I am free now, but thousands of practitioners in China are still being persecuted. Everyday people can't imagine how severe their situation is. I hope that international organizations and Taiwanese society will help them, as they have helped me."

Ms. Chu Wanchi, a well-known human rights lawyer, had a three-hour conversation with Ms. Shao after her release. She heard some of the details of what Ms. Shao experienced while detained in China. Ms. Chu related, "Shao Yuhua was arrested only because she practices Falun Gong. She was subjected to sleep deprivation. The police tried to force her to write a letter promising that she will no longer practice. She and her family were threatened." 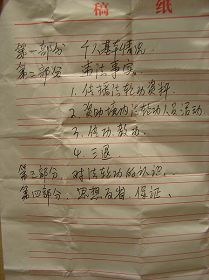 The police tried to force Ms. Shao to write a letter renouncing Falun Gong, and made an outline for her to follow

Ms. Shao Yuhua and her husband live in Hsinchu. Chang Bichin, spokesman for the Hsingchu Council, said that her mother-in-law is also a Falun Gong practitioner, and she knows that Falun Gong is beneficial to people. Chiu Jingchun, the councilman for Hsinchu, called upon the Chinese government to restore freedom of belief and release all illegally detained Falun Gong practitioners.

Ms. Shao thanked everyone for their help in gaining her freedom and requested more attention be directed to those who are still being persecuted in China.