Former Professional Dancer from China: The Dance Scenes are Splendid and Grandiose (Photo)

On the evening of July 3, 2009, the Shen Yun Performing Arts Touring Company presented its sixth show, with its colorful costumes, graceful dance and music and vocal performance, at the Audiotorio Belgrano in Buenos Aires Argentina, winning rounds of applause from the audience. 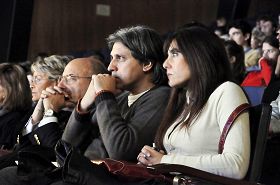 Audience was deeply engrossed by the performance

Former Professional Dancer from China: The dance scene is splendid and grandiose

Iris is a new immigrant who came from China about one year ago. While in China, she was a professional dancer. She started with ballet when she was a little girl, but later took up Chinese folk and ethnic dance. After watching the Shen Yun show, she felt the original music in it struck her most.

Iris said, "When I began to dance as a little girl, the accompanying music was composed tens or even hundreds of years ago. It is very rare to make new music for a dance program. You can tell the composers also incorporated their own understandings in the music. I feel very delighted to see this!"

According to Iris, modern people may not be able to appreciate the ancient music pieces often used in Chinese folk and classic dance, even though they are very elegant.

"I found the music pieces in the Shen Yun show are all original, which is a very bold experiment. The music they were trying to create is traditional music, which is much more difficult to compose than pop music. When you use modern thoughts to create traditional things, you can imagine the difficulty. The Shen Yun music has the essence of traditional culture and is also easily accepted by the audience. I think it is a great success."

Before the show, Iris wondered if Shen Yun dancers would also use ancient music pieces, so she felt very refreshed upon hearing the show's original music.

Iris found the dance scenes of the Shen Yun show to be splendid and grandiose. "The choreography, themes and content of the dance programs were all very good, going beyond the narrow bounds of Chinese traditional and folk dance. The classic dance pieces I saw in China were too monotone and lacked scenes of grandeur. The Shen Yun show is certainly an innovation and enrichment [of classic dance]."

While in China, Iris studied with a well-known dance choreographer. Every time there was a performance, she went to watch and learn. "I know that after a show is created, it needs continuous improvement." She believes Shen Yun has tremendous potential for growth.

She said she would for sure recommend the show to her friends in music circles and she would remind them not to miss the show when Shen Yun tours their respective countries.

Ms. Xu is the vice president of a local trade company. She came to watch the show together with music student Ms. Li. During the intermission, she said, "From start to finish, the show tells Chinese history from ancient times to present. This way one can have an idea of Chinese history without having to read books. This is very good, as it helps westerners appreciate oriental culture. Overall I feel the show is very good."

Ms. Li arrived in Argentina from Taiwan just three months ago. She said the word "wonderful" many times to describe the show, "I like the dance and music, which worked together very well. The vocal performances are also very good. Both the soprano and tenor have very good voices."

“My Experience Clarifying the Truth to the Police”