Netherlands: Practitioners Hold a Series of Activities Calling for an End to the Ten-Year-Long Persecution (Photos)

July 20, 2009, marked the tenth year of the Chinese Communist Party's (CCP) brutal persecution of Falun Gong. In order to let more people know about the persecution and help stop the CCP's atrocities, Falun Gong practitioners in the Netherlands held a series of activities in Amsterdam, Rotterdam, and The Hague. 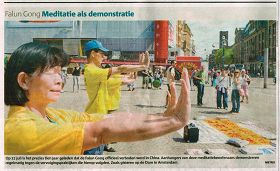 The Metro, a popular newspaper in the Netherlands, published a large photo of Falun Gong practitioners doing the exercises at Dam Square on July 17, 2009 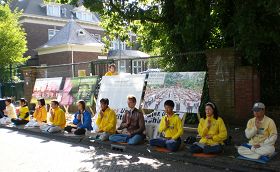 In Amsterdam: Exposing the CCP's Persecution

On July 16, practitioners held activities at Dam Square in downtown Amsterdam to clarify the facts and expose the persecution. Amsterdam is a tourist destination, and it attracts a lot of tourists from around the world during the season. The practitioners prepared flyers in multiple languages. The tourists who had learned the truth signed the petition to condemn the persecution.

An Indonesian woman of Dutch nationality carefully read the informational banners that reflected the persecution of Falun Gong practitioners in China. She kept wiping tears from her face, and said to a practitioner in a choked voice, "I'll tell these facts to my family and friends, to let more people learn about this and help stop the persecution."

A Dutch woman took a flyer from a practitioner. As soon as she returned home, she got on the Falun Gong website in the Netherlands and found a practice site in Amsterdam. Two days later, she came to the practice site to learn Falun Gong.

, a popular newspaper in the Netherlands, published a large photo of Falun Gong practitioners doing the exercises at Dam Square on July 17, 2009.

Clarifying the Facts in Downtown Rotterdam

On July 18, practitioners went to the world-famous port city of Rotterdam. Business centers in Rotterdam are always packed with bustling crowds on Saturdays. After having learned the facts about Falun Gong and the persecution, many people signed the petition to condemn the CCP's persecution.

A fashion shop clerk heard the music of "Pudu," and thouoght it was so beautiful that she came out of the shop to find out more from a practitioner. She then returned to the shop with petition forms. Shortly after, she brought back the petition form filled with signatures of her colleagues.

A person that worked for a Telecom shop nearby was moved after learning the facts, and invited practitioners to his shop to have a cup of coffee.

Protesting the Persecution in Front of the Chinese Embassy

In the afternoon, the practitioners went to Parliament Square in The Hague to demonstrate the exercises and clarify the facts. The Dutch Falun Dafa Association then delivered an open letter to the Dutch Parliament, in hopes that the Dutch government will help stop the ten-year ongoing persecution of Falun Gong in China.