July 20, 2009 is the 10th anniversary of Falun Gong's peaceful resistance to the persecution. Falun Gong practitioners in Madison, Wisconsin held a rally and a candlelight vigil on Capitol Square and in front of the library at the University of Wisconsin-Madison. 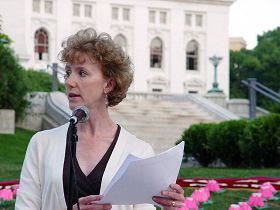 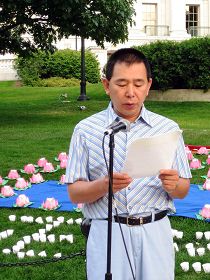 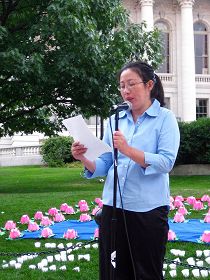 Ms. Hu Xiaojia experienced brutal persecution when she was in China. 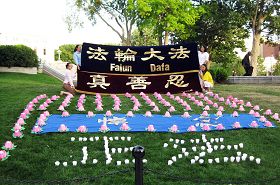 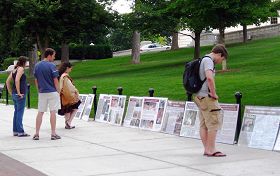 The rally started at 7:30 p.m. Local Falun Gong practitioner Ms. Eileen Hammel gave the first speech. She said she couldn't believe her ears when she heard about the persecution. Her understanding is that the CCP's evil nature made it fear any group that it was unable to control, especially those holding a different ideology. Ms. Hammel gave examples of the CCP's persecution methods. As said by renowned lawyer Clive Ansley, the CCP's propaganda campaign against Falun Gong was "the most extreme, and totally unjustified campaign of unmitigated hatred I have ever witnessed."

Mr. Feng Jian, who managed to escape from China in 2007, shared his family's story. His parents used to have very serious diseases, but regained good health by practicing Falun Gong. Just for appealing for Falun Gong, they were closely monitored and lost their freedom. They were traumatized psychologically and their health began to decline under the pressure. They eventually passed away. Mr. Feng almost died from the brutal tortures he suffered, such as being shocked with electric batons and handcuffed in a painful position for extended periods of time. His bookstore was closed and all of the merchandise confiscated. He lost millions of yuan worth of property.

Ms. Hu Xiao Jia was illegally detained three times for close to one hundred days when she was in China. She was tortured badly and almost died from force-feeding. She looked like a skeleton when she was released. She stated that the CCP's organ harvesting atrocities have shocked the world's people, leading them to see the CCP's evil nature and condemn its brutality.

The rally ended with beautiful music and a poem written by an Australian Falun Gong practitioner, "This Is the Season."

Many passersby stopped to listen to the speeches. One of them said it was great that practitioners speak out about what was happening in China because such news was rarely heard in the States. The student pointed out that the U.S. and China are tightly connected for economic trade, so what is happening in China is important to the U.S.

A girl from Romania listened quietly to the speeches from the beginning to the end.

Falun Gong practitioners lit candles around 9:00 p.m. The vigil attracted many students. Some of them had heard about the persecution before and were very sympathetic toward Falun Gong. Some of them were shocked to learn that the CCP persecutes people who follow Truthfulness, Compassion and Forbearance. A Chinese student hadn't planned to get a flier, but after hearing what Falun Gong practitioners said, he said he would ponder over why the CCP had persecuted such a peaceful spiritual group.

“Netherlands: Practitioners Hold a Series of Activities Calling for an End to the Ten-Year-Long Persecution (Photos)”