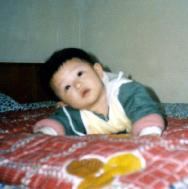 “On Children's Day, How Many Children in China Are Tearfully Missing Their Parents? (Photos)”