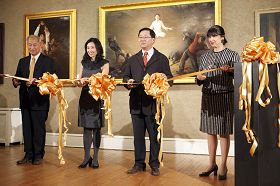 Wei Xing Wang, from NTDTV, reported that some artists said it was risky to send their paintings overseas, because they were from China, where NTDTV is blocked, and the Chinese government did not want people to be affiliated with the station. She also said that last year an artist from China sent his painting but it was never received.

Wang said the number of paintings sent in and chosen as finalists are about the same as last year, but the quality has improved.

"Some artists who submitted paintings last year have improved," she said. "They changed their style, their quality, so it's better this year. They know what we're looking for and they've improved."

NTDTV says the purpose of the competition is to promote cultural exchange and the art of figure painting that portrays pure truth, pure compassion, and pure beauty; and in doing so provide artists the opportunity to purify themselves and elevate their painting skills. 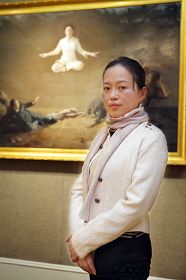 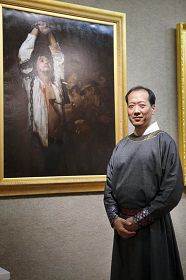 Li Yuan from Japan won the gold medal last year. He entered the competition again this year. "I learned a lot from the competition last year, and improved. I will come back again next year," he said.

The exhibition is open to the public and the paintings will be on display until Dec. 5. The awards ceremony for one gold, two silver, three bronze winners, and a number of honorable mentions will be presented on Dec. 4, along with a master's class in oil painting. The artists will do character sketches on Dec. 5, which will be auctioned off, but the oil paintings included in the exhibition will not be auctioned.