(Clearwisdom.net) The 2009 Falun Dafa Experience Sharing Conference in Korea was held in Daejeon on December 26, 2009. Eleven practitioners shared their experience of cultivating Truthfulness, Compassion and Tolerance and of validating the Fa and clarifying the truth about Falun Gong. 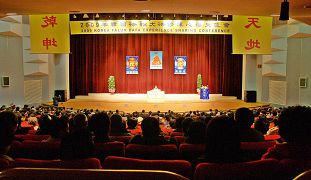 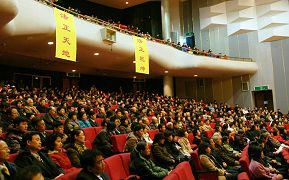 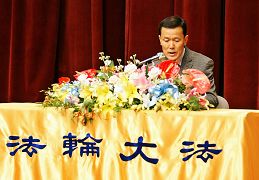 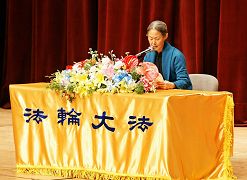 Ms. Jiang shared her experience of helping Chinese people quit the Chinese Communist Party (CCP) and its affiliated organizations. She talked about how she persuaded Christians to quit the Party. She said, "I went to the Immigration Administration. When I told a Chinese about quitting the CCP, he said he believed in Jesus. I told him 'I also believe Jesus is a righteous God. Doesn't he tell you to be a good person?' He smiled. I further listed the crimes of the CCP and told him those who practiced Falun Gong were good people. I said, 'Your Lord saves the devoted Christians. If you believe in the CCP and Jesus, you aren't devoted. How can he save you? I believe that when you quit the CCP, Jesus will be happy.' He listened carefully and agreed to quit with his true name. It used to be hard for me to help Christians quit, but now I can help two or three of them quit every day."

Mr. Guo, a Korean Falun Gong practitioner, shared his experience of upgrading his xinxing while facing his bosses' nitpicking and blame. He said, "When I followed Falun Dafa's principles and treated my bosses with a cultivator's attitude, I did better and better. I cooperated with them and did my job better. They began to change, respect me and treat me well. If it wasn't for Dafa, I would have not been able to do this."

Korean practitioner Mr. Lee once fell from a three-meter-tall tree while trimming it. He lost consciousness. When he finally came to, he wasn't able to move and was aching all over. He passed out again when he tried to move. There was a cut about five centimeters long on his scalp. He was bleeding and his right shoulder was swollen. His left hip was bruised and could have had broken. Every slight movement was extremely painful. However, he thought, "A broken bone is a physical injury in this dimension, but the true cause is in another dimension. Modern medicine would treat broken bones with casts and medicine, but a cultivator's only way would be to study the Fa, send forth righteous thoughts and do the exercises." This is what he did. As he expected, the wound on his head healed quickly. He was able to wash his hair on the third day. No scar was left when it healed completely.

He kept studying the Fa and doing exercises though it was even hard for him to move. On the next morning, he managed to pull himself to the yard despite the pain. As he began to do exercises, he suddenly felt relief. When he reached the third exercise, he got rid of all interfering thoughts and his right arm was able to move normally up and down, as the exercise requires. When he reached the fourth exercise, his left leg felt normal. When he finished all of the exercises, most of his discomfort was gone. He was able to walk normally!

Falun Gong practitioners attending the conference said they had learned a lot and were deeply touched by their fellow practitioners' righteous thoughts and actions. Many were moved to tears. Words could not describe their gratitude to Master Li. They were determined to make further advancement.

“Falun Gong: The Power of Peace in Taiwan (Photos)”