(Clearwisdom.net) Chen Yunlin, chairman of China's Association for Relations Across the Taiwan Straits, arrived in Taiwan at noon on December 11, 2009. Along the route from the airport to the hotel, Taiwanese Falun Gong practitioners stood at the major intersections, holding banners protesting the persecution and announcing the Spanish Court's indictment of Jiang Zemin and several other high-ranking Chinese Communist Party (CCP) officials for crimes of genocide and torture of Falun Gong practitioners in China. 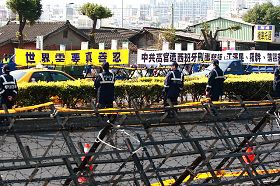 About 6,000 practitioners converged at the Windsor Hotel where Chen Yunlin and the Chinese delegation was staying. They did the Falun Gong exercises and meditation, and held banners at the nearby intersections. Their intent was to make the CCP officials aware that those who participate in persecuting Falun Gong will sooner or later be brought to justice, and at the same time, to draw public support for the effort to end the persecution.

After getting off the plane, Chen Yunlin did not exit through the normal Customs area, in order to avoid confrontation with protest groups. Instead, he left through the gate of Hanxiang Company.

Ms. Chen was among those who came to the Windsor Hotel to protest the arrival of Chen Yunlin. She said that she felt that she had to stand up to voice her concern. She had read the "Nine Commentaries on the Communist Party" and had learned of the CCP's evil nature. She was especially concerned about the CCP's harvesting of organs from living Falun Gong practitioners for profit.

Prior to the CCP officials' arrival in Taiwan, the Spanish Court indicted Jiang Zemin and other high ranking officials for crimes of genocide and torture of Falun Gong practitioners, and called for their arrest. The Argentinean Court issued arrest warrants for those indicted. Taiwanese Legislative member Chen Tingfei said that many countries have gradually seen the CCP's true nature. Since the Spanish Court has made their landmark decision, she hoped that the Taiwanese government would suspend all cross-strait negotiations.

Legislative Member Qi Chang said, "We are worried that if the CCP does not focus its strength on peace and righteous things, it can become a major threat for the whole world."

A protest group that came to the hotel in the afternoon saw the Divine Land Marching Band, composed entirely of Falun Gong practitioners, perform. The person in charge of the group was impressed by the peaceful demeanor of the practitioners and asked his group to model themselves after them. His group called out in support, "Falun Gong, way to go!"

Falun Gong practitioner Mr. Zhang and his wife, from Chungli, held a banner at an intersection. Mr. Zhang said that he could feel people's support for Falun Gong's peaceful protest. Many people passing by, whether motorists, motorcyclists or bus passengers, encouraged the practitioners by shouting, "Way to go!"

Falun Gong practitioners continued to gather in front of the hotel through the afternoon. Banners calling for an end to the persecution and practitioners in golden yellow exercise suits created a strong visual impact along the Chungkang Road. No matter which entrance the CCP officials used, they were unable to avoid the practitioners' strong appeal to end the persecution.