(Clearwisdom.net) The opening of the Truthfulness-Compassion-Forbearance International Art Exhibition was held at the Box Hill Community Art Centre in Melbourne, Australia on December 15, 2009. The exhibit included more than twenty works of art created by Chinese and Western artists from different countries, all of whom practice Falun Gong. The artists reveal a realm of brightness, purity and compassion through their art. People from all walks of life, especially those in the field of art, were moved by the artworks and had high praise for the exhibition. 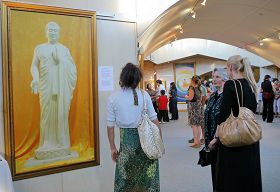 Visitors concentrate on the artworks

Kati Vereshaka, a spokesperson for the Falun Dafa Association, greeted the visitors in a speech at the opening ceremony. She told the audience about the persecution of Falun Gong in China and the significance of the art exhibition. In her speech she answered a question that is often asked: "Why does the Chinese Communist Party (CCP) persecute Falun Gong?" Ms. Vereshaka explained that the number of people practicing Falun Gong in China skyrocketed since it was introduced to the public in 1992, and by 1999, 100 million people, including 60 million members of the CCP, were practicing Falun Gong. Former CCP head Jiang Zemin launched the persecution in July 1999, out of personal jealousy. The persecution completely opposes Falun Gong's principles of Truthfulness-Compassion-Forbearance.

A Chinese woman nodded as she studied each artwork. She said, "The exhibition exposes what is actually happening in China!"

One artist who saw the exhibition said that very few Chinese artists are working on real life topics now. He studied every painting carefully and praised the artists' superb skills. Pointing to the painting "Orphan's Tears" he said, "Look! What a great job on the child's face! Her expression is shown so well!"

A Chinese artist said, "I have seen many exhibitions around the world. This one is unique. The artworks show the power of faith and deep meaning. It is well worth studying."

Another Chinese artist appeared to be heavy-hearted after studying every piece of art in the show. He said that the artworks exposed the persecution and were very convincing. He was especially moved by "Orphan's Tears." He stood in front of it for a long time with tears in his eyes.

A Chinese visitor said, "Every piece of art in the show is on the topic of the eternal and goes beyond time, space, race and history. It is an exploration of life and the universe, as well as upholding morality and conscience. The exhibition exudes enormous power, which is the power of justice."

Mr. Lin, a former chair of the Taiwanese Association, said his favorite piece was "Call of Innocence." "The child's eyes look so pure and touching! Children can't hide their feelings. You can tell how sincere she is! She is holding a banner saying 'Killed for Their Belief.' It is very moving! It [the persecution] is hard for us to imagine."

Pointing at "My Son," Mr. Lin said slowly, "The elderly lady's face tells how much she has experienced in her life. With her dead son in her arms, her eyes look so sad! It is the suffering of us Chinese. The Chinese people are so kind but have endured so much suffering! It is very saddening!"

Visitors to the exhibition continued to come, and many were moved to tears.