(Clearwisdom.net) On December 14, 2009, a rally in Ireland was held to celebrate the fifth anniversary of the Nine Commentaries on the Communist Party, and to support the 64 million Chinese people who have quit the Chinese Communist Party (CCP) and its affiliated organizations. 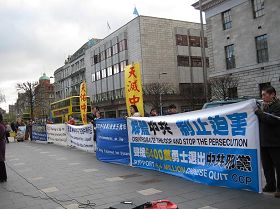 Rally in Dublin in support of Chinese people quitting the CCP

A representative for the Epoch Times, Ms. Liu addressed the rally. She said, "On October 19, 2004, the Nine Commentaries on the Communist Party was published. For the first time in history, it exposed the CCP's evil, bloody nature, its deceitful and violent regime. The CCP killed 80 million Chinese people. It persecutes the kind and innocent Falun Gong practitioners, and even harvests the vital organs from living Falun Gong practitioners. Many Chinese people have awakened after reading the Nine Commentaries, resulting in their quitting the CCP and its affiliated organizations.

"In the past several decades, Western countries attempted to facilitate changes in the CCP by economic means, which have proven to have failed. The huge tide of quitting the CCP is a process of disintegrating the CCP, which come from deep in the heart of the Chinese people. They went through the steps from being threatened by the CCP, and having illusions of it, to denouncing and quitting it publicly. The breaking down of the Berlin Wall marked the entire failure of the Communist movement, while the CCP's 'Berlin Wall' is experiencing another earthquake."

Falun Gong practitioner Mr Zhao Ming announced the recent news of the Spanish court's indictment of Jiang Zemin, Luo Gan, Bo Xilai , Jia Qinglin and Wu Guanzheng, for their persecution of Falun Gong. Mr. Zhao is one the fifteen plaintiffs in the lawsuit against Jiang Zemin and others in Spain.

Mr. Zhao said, "I was detained for nearly two years by the CCP for practicing Falun Gong and was tortured in prison. I participated in a series of lawsuits against the CCP officials who persecuted Falun Gong. I went to Spain in person to present evidence and a statement before the judge in this case. After a two-year investigation, the Spanish National Court decided to indict the five defendants, including Jiang Zemin, and issued a summons to them. The defendants have a four- to six-week contestable period. If there is no different opinion, the court will issue an international arrest warrant. The five defendants can then be arrested and prosecuted if they travel to any country where there is an extradition treaty with Spain."

Mr. Zhao also said, "This is only a start. The final trial will actually happen in China. After the CCP disintegrates, all the officials who participated in the persecution will face trial. They will want to escape to other countries. But there are international arrest warrants waiting for them. They will end up with nowhere to hide." 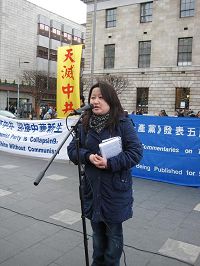 Ms. Ye, a volunteer for the Ireland Quitting the CCP Service Center

Ms. Ye, a volunteer for the Ireland Quitting the CCP Service Center, said, "The H1N1 flu has spread everywhere in China. But the CCP tries its best to cover up this fact, in disregard of the Chinese people's lives. People are indignant, and have declared one after another on the Epoch Times website their withdrawal from the CCP and its affiliated organizations."

Ms. Ye said that at the rally site a Chinese person from Jiangsu Province declared his withdrawal from the CCP's Young Pioneers. That person said, "I came to know the evil nature of the CCP when I came abroad. I am willing the quit the Young Pioneers in support of justice."