(Clearwisdom.net) On December 10, 2009, International Human Rights Day, Falun Gong practitioners in London held a series of activities to call attention to the ongoing persecution of Falun Gong in China. The activities included a parade, rally and candlelight vigil.

Over the past several years, practitioners have held activities in front of the Chinese Embassy on every International Human Rights Day. This year, practitioners called attention to the Spanish National Court's indictment of the chief perpetrators of the persecution, including former President Jiang Zemin. A banner reading, "Spanish court indicts Communist Party officials for torture and genocide of Falun Gong," was prominently displayed in front of the Chinese Embassy. 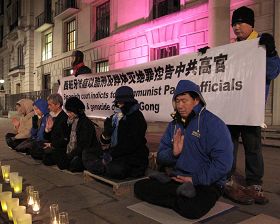 The practitioners handed out a number of flyers and other informational materials. Many people expressed their support. Several Chinese tourists saw the banners and were shocked upon learning the true facts about the persecution and the Spanish National Court's action.

Ms. Zhong, a Falun Gong practitioner from Cambridge, stated, "My purpose in coming to this event is to call for the end of the persecution."