(Clearwisdom.net) December 10, 2009 was International Human Rights Day. It was also the day for the second hearing for the lawsuit against Chen Shaoji, former Secretary of the Guangdong Provincial Political and Judicial Committee, for his crimes of unlawful imprisonment and torture of Falun Gong practitioners. Practitioners in Sydney held a press conference in front of the New South Wales High Court to announce the progress of the three lawsuits against high-level CCP officials and call on Australia to uphold justice.

Plaintiffs in the three lawsuits against persecutors of Falun Gong

When Chen Shoji was Deputy Secretary of the Guangdong Provincial CCP committee and Director of the Provincial Public Security Bureau, at least 64 Falun Gong practitioners were tortured to death.

The plaintiffs and their lawyer appeared in court and stated that the court papers were sent to the defendants via diplomatic channels and the defendants never answered the charges. The lawyer asked the court for more time to prepare materials for a default judgment.

Plaintiff Xie Yan said, "I hope that the lawsuits in Australia and Spain are a warning to those CCP officials who follow the CCP to continue the persecution. The perpetrators in this persecution will be brought to justice."

Spokesperson John Deller of the New South Wales Falun Dafa Association called on the Australian government and people to pay attention to the CCP's ten-year-long persecution of Falun Gong. 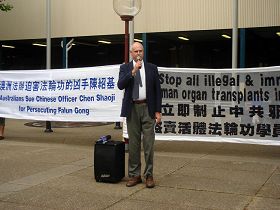 At the press conference, plaintiffs Jingxiao Chen and Changzhi Yue also came to support the lawsuits against Zhou Yingkang. They called on the Australia court to uphold justice.

Ms. Yue, former electrical engineer of the Space Department in Beijing, is in her 70s. She was imprisoned for four years in China for her beliefs. She suffered a broken spine in three locations from beatings during her imprisonment.

Ms. Cuiying Zhang, a Chinese artist in Australia and one of the 15 plaintiffs in the lawsuit against Jiang Zemin and other CCP culprits, said she was encouraged by the Spanish court decision and hoped the Australian courts could take similar action.

Ms. Zhao, Director of the New South Wales Falun Dafa Association, said that the next hearing in the lawsuit against Chen Shaoji would be held next March. If the defendant is absent, the plaintiffs can ask the court to make a default judgment.

Ms. Zhao said, "Today is International Human Rights Day. We are holding this press conference to express our support for the lawsuits and to call on the Australian government and courts to uphold justice and human rights." 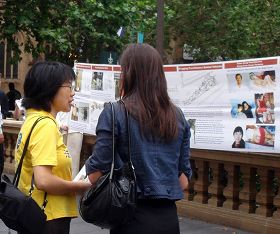 Passers-by pause to learn the facts

After the press conference, practitioners held up banners and had group practice. Passers-by stopped to learn the facts, and many signed the petition to support Falun Gong. From 5 p.m .to 7:30 p.m., other practitioners held activities near Sydney's city hall. They held banners in long lines to expose the persecution and call on the Australian people to help stop the persecution.

“My Cultivation Experience as a New Practitioner”