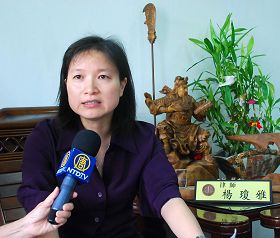 Attorney Yang Qiongya, member of the Coalition to Investigate the Persecution of Falun Gong

Ms. Yang said that the lawsuit in Spain will require support from the international community. "When these culprits visit other countries such as Taiwan, those governments should extradite them to Spain because everyone has the obligation to safeguard human rights."

Ms. Yang continued, "Accomplices to the persecution should admit their mistakes so that they can receive leniency. The international society can give them one more chance. However, they cannot continue their crimes."

Regarding the fact that Bo Xilai, one of the five accused, may visit Taiwan next year, Yang urged the Taiwanese government to extradite him to Spain for justice if that happens.

She also emphasized, "Taiwan is a democratic country and we uphold human rights. We should urge mainland China to respect human rights and democracy and stop committing crimes against humanity."

“Renowned Law Professor: Spanish Lawsuit against Former Communist Head Is a Warning to All Wrongdoers (Photo)”