(Clearwisdom.net) On October 31, the First Vice-Premier of China and member of the Chinese Communist Party Politburo Standing Committee, Li Keqiang arrived in downtown Brisbane. Falun Gong practitioners rallied outside Stamford Plaza to condemn the 10-year persecution of Falun Gong that is taking place in China. 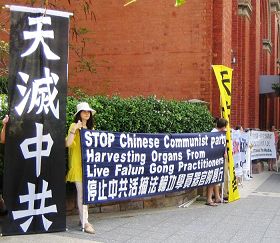 Falun Gong practitioners rallied outside Stamford Plaza, where Li Keqiang was staying, to protest the persecution of Falun Gong in China

Because of his belief in Truthfulness-Compassion-Forbearance, Frank Zhao was tortured in a labor camp for two years. He participated in the rally to express his heartfelt wish to the visiting Chinese Communist officials: Stop the persecution of Falun Gong.

The peaceful protest attracted the attention of the mainstream media including ABC and The Sunday Mail. Many passersby asked about the rally and expressed their support for Falun Gong.