The Persecution of Mr. Gu Mingcong and His Family (Photos) 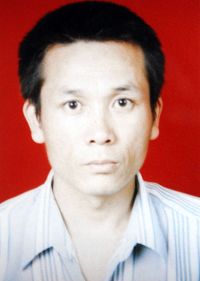 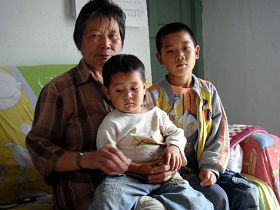 Mr. Gu is handicapped and walks with canes. He makes a living by repairing cell phones. He was arrested for clarifying the facts about Falun Gong and was sentenced to a four-year term on January 12, 2009. His father died from the stress he endured worrying about his son.

Mr. Gu was diagnosed with polio when he was 19-months old. After three surgeries at a young age, he was barely able to walk with two canes. The elementary school he attended was only a few hundred meters away from his home, but he was only able to walk there slowly. The middle school was far away and his father carried him to school on his back every Monday, and carried him home every Saturday.

After graduating from middle school, Mr. Gu did not want to burden his family anymore so he quit school and learned to repair household appliances. However, his health continued to deteriorate. He could not sleep at night and was often sick. His body was covered with red spots, from a low count of blood platelets. He began to practice all sorts of Qigong but there was little improvement in his health.

In 1997, Mr. Gu heard that Falun Gong had miraculous effects on treating illnesses and improving health, so he began to practice Falun Gong. He tried to live according to the principles of Truthfulness-Compassion-Forbearance, and his health has improved tremendously. He was then able to walk with one cane and help with the housework. He was kind and always willing to help others.

2. Arrested and Sentenced for Clarifying the Facts about Falun Gong

In the morning on July 30, 2008, Mr. Gu was reported for clarifying the facts about Falun Gong while working in the repair shop of a telecommunications company. Jiang Fengliang and Wang Xinghua, officers from the county Domestic Security Division, arrested Mr. Gu and searched his home. They confiscated his computer, DVD recorder, Falun Gong books and materials, more than 100 blank DVDs and other personal items and took him to the detention center.

During his detention, Mr. Gu's mother went to the Domestic Security Division several times and demanded his release. Officer Wang Zifa told Mr. Gu: "Since you've had your computer for about one year, we estimate that you distributed 210 Falun Gong related DVDs. If you think this is correct, sign your name on the prepared document." Mr. Gu refused. Officer Jiang Fengliang then said: "If you sign your name, we will be lenient towards you for your good attitude. Otherwise, we will hold you for several years. By then, your wife will have left you. What can you do? Why not just sign your name and we'll be lenient toward you." Eager to rescue her son and believing that by signing the document her son would avoid going to prison, Mr. Gu's mother signed on the document and asked her son to do the same, which he did. The police promised that as soon as the Beijing Olympics Games were over, they would release him. Mr. Gu has still not been released.

On September 4, 2008, officers Pu Menghua and Huang Liping from the Domestic Security Division went to Mr. Gu's home with an arrest warrant and asked his father to sign it. Pu lied to his father: "If you sign this document, your son will be released within two months." Huang Liping also lied to his father by telling him, "He'll be sentenced with a reprieve and come home soon." Worried about his son, Mr. Gu's father became sick and went to the hospital. His medical bills amounted to more than 15,000 yuan. Mr. Gu's mother went to the Domestic Security Division to demand the release of her son again, and was told by the officer: "Your son's case is serious and has been submitted to the Procuratorate. It's out of our hands. You need to talk to the Procuratorate." At that time, Mr. Gu's mother realized that the Domestic Security Division had been lying all along. Her son had been sentenced with falsified and coerced documents.

On January 8, 2009, the Huili County Court tried Mr. Gu. Attorney Li Peirui pleaded not guilty on behalf of Mr. Gu and argued that the distribution of the DVDs of Shenyun Performing Arts did not pose any harm to anyone, nor did it have any negative impact and therefore it should not be used as evidence. In the end, Judge Qiu Yunting recessed the trial.

Mr. Gu mother has been left with the responsibility of two young grandsons, a 10-year-old and a 3-year-old, three acres of farmland and a debt of 20,000 yuan. The family is in a very dire situation.