Israeli Youth: I Have Finally Found the Way Home (Photo)

(Clearwisdom.net) "It was just at the moment when I saw the Falun Gong practitioners doing the exercises that I felt a warm glow inside me. I hadn't had such a feeling for many years. I suddenly realized what I had found--I had found the way home." This was the reaction of Ohad, a young man from Israel, who first came to a Falun Gong exercise site three years ago in 2006. 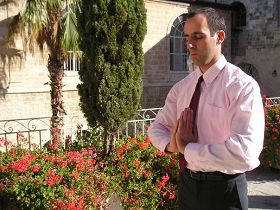 For Ohad, such a warm feeling was unexpected. At that time, he was 28 years old and a technical adviser for Internet search engines. He originally wanted to learn Falun Gong in the hope of improving his sleep disorder.

By then, he had been suffering from an inexplicable fatigue for five years. Although he looked healthy and lived a normal life, he felt tired no matter how much time he slept. His doctor told him that he had a sleep disorder for which there was no real treatment at present and recommended that he have an operation and have a device installed, so that he could control his sleep with it.

Ohad did not want to have such an operation. He started to look for information on how to cure his condition on the Internet since he worked as a technical adviser on Internet search engines. On the English Clearwisdom website, he read an experience sharing article by an American that practiced Falun Gong. The American used to feel tired all the time like Ohad, and he had also some other medical conditions. For many years, he had looked for and tried all kinds of treatments, from Eastern to Western, from traditional to modern, to have his illnesses cured. The only thing that happened, however, was that his conditions worsened. When he started to practice Falun Gong, after only a very short time, all his conditions completely disappeared, and he was well.

Ohad was very surprised by what he read and wanted to try it himself. From the Internet, he found a practice site near where he lived and phoned the coordinator before heading to it.

Back from the practice site, Ohad bought the book entitled China Falun Gong. The same day, he started to read Zhuan Falun, having downloaded it from the website. He said, "A week after I started reading the books and doing the exercises, my life changed and hasn't been the same since."

Two weeks after he started practicing the exercises, Ohad went to a sleep laboratory to keep an appointment he had made previously. He said, "At that time, I was full of energy because I had already practiced for two weeks--I did the Falun Gong exercises and studied Zhuan Falun everyday."

After the exam, with surprise, the doctor said, "Everything is fine, which I don't understand."

Ohad showed her the results of an exam he had had five years before. After comparing the results of the past and current exams, the doctor was incredulous. However, it was clear that Ohad had a sleep disorder in the past, but how he was normal.

He finally found answers that had eluded him for years

Not only did Ohad have no feeling of tiredness, but he started to view himself, people, and things around him differently. He said, "I used to quarrel with my father, though he was very kind to me. I have realized after practicing Falun Gong that he is trying his best to be a good father and that I should respect him and be kind to him. Now our relations have improved a lot. I not only respect him but seek his advice about a variety of things as well."

In fact, in the past Ohad had hoped that he would be able to improve everything about himself--to be perfect, more relaxed, more efficient, more comfortable, and more successful, but he failed. "About 15 years ago before practicing Falun Gong I had tried different methods to improve myself. I read many books in an attempt to find a way to improve myself. But nothing stuck. I read one book after another, and even read one book twice but then put it aside, because I thought it could not really change me."

Since practicing Falun Gong, he has started to measure everything he does according to the principle of Truthfulness-Compassion-Forbearance and think about others first. He can look inward when encountering contradictions and conflicts. He has found that great changes have taken place in his starting point. "Before becoming a practitioner, although I thought that I was a good person, in fact, I was selfish and offended others. Since practicing Falun Gong, I have found that the things I used to pursue were not what I really wanted. As a matter of fact, what I have really wanted is to be a better person, and not only for myself. I had never realized this before."

As a Jew living in Israel, he has lived in a rich religious environment. Before practicing Falun Gong, he had been thinking that he was not a real believer, so he did not pay attention to its code of ethics. "Since practicing Falun Dafa, I have really come to believe in the existence of God and that good will be rewarded with good and evil will meet with evil. I have started to treat others kindly. To practice, I don't need to change my way of my life in the secular world. What I need to do is to be a good person according to Truthfulness-Compassion-Forbearance. Only by doing this can I follow the most positive values and become a sincere believer."

The persecution of good people should end immediately

It was not long after he became a practitioner that Ohad learned about the persecution of Falun Gong happening in China. When he found out about the CCP's crime of harvesting organs from living practitioners, he thought it frightening, something he could hardly believe.

It made him think of the Nazis slaughter of the Jews. "As a Jew, I know that all these things happening in China are so terrifying and so shocking that people can hardly believe they are possible, and they let matters drift. This is very similar to then massacre of the Jews by the Nazis in WW II. Many years ago, tens of millions of people were massacred, but the whole world did not utter a sound, almost no sound. How could this be?"

He hopes that the results of ignorance and inaction will not be repeated, so he tells people in Israel what is happening in China now. He has told how many Falun Gong practitioners have been forced to do hard labor in prisons and even in toxic environments just because they are resolute in their belief. At the same time, the Israeli people have also suffered as a result of these human rights violations, either directly or indirectly, because many Israeli enterprises have moved their production to China, and some Israelis have lost their jobs.

In July 2009, he went to Washington, DC, for the first time and participated in parades and rallies to protest the persecution with Falun Gong practitioners from all over the world. Standing in the scorching sun, he said, "We should tell those in the White House and those that are reading newspapers and watching TV how so many people are willing spend their own time and money to come here to protest what is happening on the other side of the world. We should do what it takes."