(Clearwisdom.net) In the middle of July 2009, the European Divine Land Marching Band was invited by the German Culture and Human Rights Association and the organizer to take part in the opening ceremony of "Spirit Asia," an open-air festival in Nuremberg, the second largest city in Bavaria. The CCP officials that were supposed to speak at the ceremony walked out in anger because of the performance by the Falun Gong practitioners. The move drew the attention of the local media and the general public. More and more people learned the truth about the persecution of Falun Gong by the CCP.

Asia Spirit in Nuremberg is the largest outdoor activity focusing on Asia in Germany. During the ceremony, the Divine Land Marching Band, consisting of some 70 practitioners from different countries all over Europe, played beautiful musical selections to the delight of the audience. 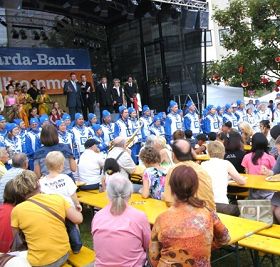 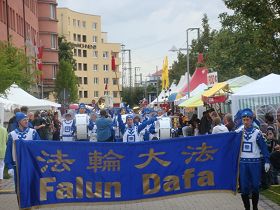 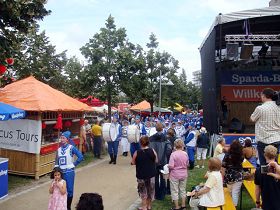 Among the VIPS who made presentations at the opening ceremony were some important local figures, such as Mr Roland Flerk, the economy consultant of the Nuremberg city government; a representative of Sparda-Bank, and Martin Burkert, MP, among others. The CCP's representative, Yiping Zhang (phonetic spelling), from Numremberg's Chinese sister city of Shenzhen was supposed to make a speech at the opening ceremony, the same as in the previous years. But when he arrived and saw practitioners circulating brochures about the CCP's cruel persecution of Falun Gong practitioners, as well as the banner of the Free Tibet organization saying that the CCP is misleading the whole world, he changed his plans and left in anger. His departure drew the attention of the local media, and it became the focus of the news about the Asia Spirit event. One news report said that Falun Gong's participation in the cultural activity added to the festive atmosphere and also showed how Falun Gong is being persecuted severely in China.

Because of misunderstandings about Falun Gong, the report described the practice in unflattering terms as quoted from CCP propaganda. After the report was aired, several practitioners looked for members of the press to accurately explain the facts of the situation. Later, the local paper indicated in another report about the Asia Spirit event that Falun Gong has been cruelly persecuted by the CCP for ten years. It gave the example of a member of the Divine Land Marching Band, Jufeng Guo, who was tortured in different places in China for 450 days. A month later, when the journalist who wrote the first report returned from his holiday and received the information explaining the facts, he wrote a long letter to apologize to the Falun Gong practitioners, saying that he would never again make the same mistake in describing Falun Gong.

Recalling the first Asia Spirit event, local practitioners prepared a lotus dance to demonstrate the purity and beauty of Falun Dafa. But the non-profit hosting organization turned them down, most likely due to pressure from the CCP. But the practitioners didn't give up in their efforts to let people know the truth about Falun Gong.

In preparation for the fourth Asia Spirit festival, the German Culture and Human Rights Association of Nuremberg extended an invitation to Falun Gong practitioners to take part in the three-day event. Many people stopped in front of the practitioners' booth to talk about Chinese culture, China's human rights, and the truth about Falun Gong. There were also kids learning how to fold paper lotus flowers. In the stage performance, practitioners modeled and explained the significance of ancient Chinese costumes. They then demonstrated the Falun Gong exercises and played music that showed how practitioners persevered in their belief in Truthfulness-Compassion-Forbearance despite the persecution. Their programs delighted and moved the spectators. The presenters gave practitioners their best wishes and hoped the persecution would cease as early as possible.

The organizer of Asia Spirit was very glad to have the Divine Land Matching Band perform at the opening ceremony. When he saw initially saw photos of the band, he was touched. He phoned event organizers in other cities, such as Frankfurt, and learned that the Divine Land Marching Band's performances were gratifying.

At the conclusion of the Asia Spirit event, the organizer apologized to practitioners for the disturbance caused by the CCP officials. He said that he knew it would be impossible for Falun Gong and the CCP representative to be at the opening ceremony at the same time, but he clearly said that he wanted Falun Gong to be present. It was the CCP official that insisted on getting involved and then created a disturbance by publicly leaving, which actually served to remind people that Falun Gong is still being persecuted by the CCP. That is actually what practitioners have persevered in saying for many years. This time, when the CCP officials created a disturbance, the media got interested, and the truth about the persecution could be widely disseminated.

“Macao: Explaining the Facts about the Persecution during the Mid-Autumn Festival (Photos) ”

“Israeli Youth: I Have Finally Found the Way Home (Photo)”