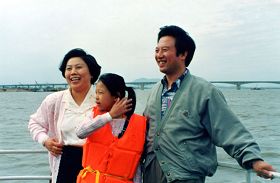 Ma Xuejun, his wife Ms. Chuang Jing, and their daughter

Ms. Chuang Jing and nine other practitioners are being detained in the Jiamusi City Detention Center, and Mr. Ma's residence is still being monitored. Since the persecution of Falun Gong started on July 20, 1999, Mr. Ma has been subjected to illegally arrests, detention, and forced labor. He has also been dismissed from his job, cut off from sources of income, and sentenced to a 12-year prison term, as well as a series of brutal tortures. In December 2002, he was so severely tortured that he became disabled. When he was on the brink of death, the police finally released him and carried him home on a stretcher. Ms. Chuang Jing has been arrested five times since July 1999, being detained three times and twice sentenced to forced labor. During the last incarceration, she developed cervical cancer. She was released on medical parole when she was skin and bones.

Ms. Ma Xiaoliang was mentally traumatized by the long term brutal persecution of her parents. Now in her twenties, she is already suffering from illnesses such as heart disease and anemia. One night while she was home alone, police officers from the security division of the railroad police department barged into her home and ransacked it. They opened the door with a master key, pulled her out of bed and searched her while she was only in her underwear. She was originally an outgoing, cheerful person but since that midnight invasion, she has become quiet and depressed.

Mr. Ma's mother-in-law coped with grief due to her husband being tortured to death during the Cultural Revolution. During these last several years, she was so worried about the persecution of her daughter and her son-in-law that her heart condition worsened and she died in early 2006. Just a day before her death, she said to her eldest daughter, "I am so worried about Ma Xuejun and Chuang Jing. When will the suffering end?"

A picture taken in late 2003, which shows Ma Xuejun after he was persecuted

After the persecution of Falun Gong started, Mr. Ma's parents, who are in their seventies, his uncles and their wives, his brothers and sisters, a total of more than twenty individuals, were arrested and taken to the Jixian County Detention Center. His mother previously suffered from lung disease, heart disease, rheumatoid arthritis, and many other illnesses, all of which disappeared after she started practicing Falun Dafa. She was detained for two months and went into convulsions. The detention center officers were afraid of being held responsibile and released her. The other practitioners in his family were released after they paid the "guarantee fee" of 2000 yuan. Mr. Ma's two brothers-in-law have been arrested and sentenced to forced labor. Mr. Ma's entire family practice Falun Gong and all have been persecuted by the Chinese Communist Party. His mother has had to live with nerve-wracking tension and is now blind in both eyes.

From what Mr. Ma and his family have had to endure, it is evident that Jiang's group is indeed implementing its persecution policy of "destroy them physically, bankrupt them financially, and ruin their reputations," toward those who believe in the principles of Truthfulness-Compassion-Forbearance.

Mr. Ma Xuejun is a former deputy division head at the Jiamusi Railroad Bureau. In 1985, he was diagnosed with aplastic anemia and then contracted hepatitis B from a blood transfusion at the railroad hospital. In September 1994 he started practicing Falun Dafa, and all of his illnesses disappeared. His wife, Ms. Chuang Jing, used to suffer from a uterine tumor, bronchitis, and other diseases, often with severe bleeding. After she consulted with major hospitals, she was advised to have the necessary surgery, but due to her severe anemia, the surgery could not be performed. After she started practicing Falun Dafa, her uterine fibroids resolved themselves. All of her other illness also disappeared.

Mr. Ma followed the Falun Dafa principles of Truthfulness-Compassion-Forbearance, and conducted himself accordingly. Employees in his work section called him the "cleanest" official (someone who doesn't take or ask for bribes).

After July 20, 1999, Mr. Ma was a primary target of persecution by Jiang's regime and his political hooligan group. At the time, officials from numerous government agencies in Jiamusi City, including the city committee, the political and law committee, the propaganda bureau, the television stations, the Public Security Bureau, the Railway Public Security Bureau, and the local neighborhood cadres at all levels, were involved in persecuting Mr. Ma. In December 2002, after he was tortured to the brink of death, the police carried him home. His wife constantly read Dafa books, including {{Zhuan Falun} to him, and other practitioners and his relatives and friends also helped.

Over the years, on the so-called sensitive dates, officials from different entities harassed him, under the guises of visiting him. In severe cases, there were dozens of vehicles and countless undercover police completely surrounding his home.

The staff of the 610 Office from Jiamusi City knew that Mr. Ma had already been dismissed from his public office and he had no source of income. His family depends on his wife's pension of a few hundred yuan for living, but in order to completely deplete Mr. Ma's finances, the head of the utility department used the pretext of delinquent electric bills to cut of his electricity. Mr. Ma's home has been without electricity for three years. Ms. Chuang Jing located the original head of the electric department, but the official told her to take the issue up with the Jiamusi City's Municipal Committee and the 610 Office. So far, the issue has not been resolved.

Officials from the Housing Sector Bureau have now started to send out delinquent electric bill notices. Apparently, Mr. Ma's family will again be deprived of heat this winter. Coping with persecution on all fronts, at around 9:00 a.m. on September 19, 2009, his wife, Ms. Wen Ying, along with Ms. Liu Guiqin and twelve other practitioners, were arrested by officers from the Jiamusi City Nangang Police Station and Qianjin Police Department Sub-bureau. For details of this arrest, please refer to the Minghui.net article dated September 23, 2009: http://big5.minghui.org/mh/articles/2009/9/23/208844.html. During the illegal arrest, because Ms. Chuang did not cooperate, four officers from the Nangang Police Station brutally kicked and punched her, and dragged her from a second floor down into the police vehicle. Inside the car, an officer stepped hard on her legs. He didn't stop until a practitioner in the car made him. In the Nangang Police Station, she was locked in a small cell alone, handcuffed to an iron chair, and brutally beaten.

This is Ms. Chuang's fifth arrest. She is now experiencing internal bleeding from being tortured, and her family members are very worried. The police arrested her just when her husband's critical condition needed her help the most. Mr. Ma now depends on help from his relatives and friends. As though the persecution of Mr. Ma's family was not enough, the police have now set up surveillance to monitor his every move.

We call upon the international community and human rights groups to help stop the Chinese Communist Party's decade-long brutal persecution of Falun Gong.

“A Practitioner Who Inspires Me to Be More Diligent”