(Clearwisdom.net) The satellite signals of Asia-Pacific New Tang Dynasty Television (NTDTV) were interrupted for up to 15 days during the Chinese Communist Party's (CCP) National Day around October 1, 2009. On October 5, 2009, Lai Qingde (Lai Tak), a legislator, held a press conference in the Taiwan Legislature. The theme of the conference was "Taiwan's satellite communications are not secure. The Asia-Pacific NTDTV signal was arbitrarily interfered with for 15 days!"

Legislator Luo Shulei; representatives of Asia-Pacific NTDTV, Chunghwa Telecom, the Mainland Affairs Council, the National Communications Commission (NCC), and the Ministry of Communications; other government officials; and private parties were invited to the conference to discuss the issue and to call on the authorities to pay attention to the fact that the CCP has violated freedom of the press and freedom of communication. They called for a thorough investigation into the truth of the interference and asked that the international community provide professional advice to assist in this investigation. 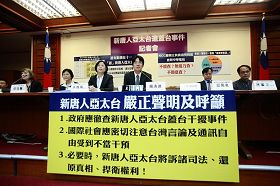 On October 5, a press conference was held in the Taiwan Legislature by Legislator Lai Qingde (Lai Tak) to discuss the issue of satellite communications security in Taiwan in light of the interference with NTDTV's signal. From right to left: human rights lawyer Ling Fengzheng (Raymond Lam), Chiu Huangchuan, Legislator Lai Qingde, and Theresa Chu, spokeswoman for Asia-Pacific-Taiwan NTDTV. Zhang Ruilan, the general manager of Asia-Pacific-Taiwan NTDTV, explored the truth of the interference of NTDTV. 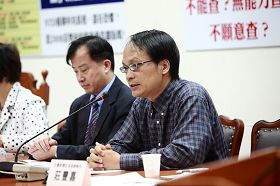 Evidence That the CCP Was Behind the Interference

Zhang Ruilan, the general manager of Asia-Pacific NTDTV, said that the CCP has always been afraid of the media exposing the truth about its persecution of human rights. Using its political and economic power, it interferes with and blocks international media. During the "National Day" celebrations, NTDTV's signal in the Asia-Pacific region was blocked for days, suggesting that the CCP was directly or indirectly responsible.

NTDTV has always been known for its independent reporting of the facts in China. In recent years, NTDTV has broadcast more comprehensive and in-depth coverage of topics the CCP considers "sensitive,"such as democracy; freedom; human rights, including the protection of human rights in various parts of China; as well as corruption and chaos; the persecution of Taiwan businessmen and minorities; underground churches; Falun Gong; etc. Thus it has been the target of CCP pressure internationally.

Theresa Chu, a spokeswoman and lawyer for Asia-Pacific-Taiwan NTDTV, said that the CCP has continuously interfered with the independent broadcasting of NTDTV ever since 2002, and that the most serious incident was with Eutelsat.

Prior to the Olympic Games in Beijing in July of last year, the international organization "Reporters Without Borders" investigated the incident and reported that the "European Satellite Company (Eutelsat) stopped NTDTV signals over China to please the CCP in order to obtain the CCP's business." This caused serious concern in Europe and in the international community. NTDTV obtained 477 signatures from the European Parliament on the European Parliament Resolution "to restore the broadcast of NTDTV in China by the European satellite companies."

The representative of NTDTV said it was an internationally well-known and indisputable fact that the CCP has always been afraid of the media exposing the truth about its persecution of human rights and has used its political and economic power to interfere with independent signals. The Eutelsat incident and the interruption of the NTDTV signal during the CCP National Day holidays are clear indications of the the CCP's involvement.

Gail Rachlin, NTDTV board member, stressed that the satellite signal interference in Taiwan is closely related to freedom of the press and especially to the issue of state communications security. "Satellite signal provider Chunghwa Telecom still does not know how the interference took place. We request an immediate investigation into this incident. We want a clear answer and hope it will never happen again," said Rachlin.

Rachlin stressed that freedom of the media is very important in the US, and she believed it was the same in Taiwan. For satellite signal inference in Taiwan to last that long was a violation of Taiwan's freedom to access the news. Rachlin has asked the government to find the source of the interference.

Legislator Lo Shu-Lei believes the incident involves state security. "If our satellite can be interfered with easily, then when the country needs the satellite system in urgent situations, it's finished." Lo believes that it is dangerous that the investigation is not moving forward and the problems with satellite security cannot be solved.

The NTDTV statement pointed out that, whether the signal interference came directly from Beijing or Beijing exerting economic/political pressure on Chunghwa Telecom, they both directly endangered Taiwan's media freedom and state security.

Beijing's Suppression of Freedom of Speech Extends to Taiwan

Attorney Lin Feng-Cheng, CEO of the Judicial Reform Foundation, used to work for Radio Taiwan International (RTI). RTI broadcasts to China through short wave and is a legal channel internationally. However, Beijing has always interfered with RTI signals. "There was not one day the signal was not interfered with," said Lin. Lin suspects that NTDTV's satellite problem comes from Beijing.

Chairman Leon Chuang from the Association of Taiwan Journalists said that Beijing buys off media in Taiwan when it can. When it cannot, it blocks the media with its technology.

Chuang gave an example. In March 2008 during the Tibetan uprising, many foreign journalists went to Tibet to report on the incident. The building they stayed in was the only building that encountered a power shortage. "Beijing will do anything it can to monitor and interfere with media freedom," said Chuang.

Human rights lawyer Ken Chiu offered a reminder that Beijing utilizes many ways to sabotage freedom of speech and the news. According to Chiu, Beijing buys off electronic and paper media in Taiwan and blocks the Internet, as it did the BBC Chinese site during the Olympics last year.

Chuang was very supportive of NTDTV's movement to protect freedom of speech, especially when NTDTV is trying to expose the issues that people in Taiwan cannot receive through regular news channels. "Freedom of speech in Taiwan will be seriously damaged if this incident of satellite interference is not taken care of properly and promptly," Chuang warned.

When Necessary, NTDTV Will Use Legal Means to Restore the Truth

NTDTV Asia-Pacific Station General Manager Ms. Zhang Ruilan appealed to the international community to pay close attention to freedom of speech so that telecommunications in Taiwan will not be interrupted and violated. In the future, they will provide reports to international organizations, such as Reporters without Borders, regarding how the government, Congress, and China Telecom in Taiwan carried out their investigations and handled this situation. At the same time, she stressed that when it is necessary, NTDTV will use legal means to restore the truth and safeguard the right to broadcast legally.

Legislative Council member Lai Deqing said, "Whether it is NTDTV or other TV stations, they should all be under the protection of the government. Freedom of speech is something that the government should safeguard the most." He demanded that the NCC invite scholars and experts from home and abroad to set up a credible investigation group that will, based on the evidence that the China Telecom in Taiwan has on hand, provide a reasonable answer within one week.

Others attending the meeting included human rights lawyers Qiu Huangquan, Lin Feng, and Zhuang Fengjia from the Taiwan Journalist Association. They said that broadcasting interruptions were a crime and that, besides NCC investigation, the local Procuratorate in Taipei should take action as well to actively participate in the investigation. They look forward to the government carrying out an all-around investigation to get to the bottom of the situation and find whoever is behind it in order to safeguard the freedom of media and national security.

The Global Chinese TV station--the NTD APTV located in Taipei, Taiwan--has 1.64 million viewers, and its broadcasting covers 80 percent of mainland China. From September 17 to the 30, the two weeks before "October 1" (a CCP "sensitive day"), people had difficulty receiving some signals from APTV. The satellite signals of NTD APTV were interrupted by unknown sources. As a result, such programs as Global News, China Forbidden News, and some commentary programs were interrupted. On October 1, signals from the APTV station were blocked. This was the very first case of a Taiwanese unofficial TV station being interfered with for a long period of time. 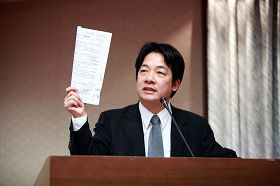 On October 1, Legislative Council Member Lai Deqing said at the council meeting that having NTD APTV's signal interfered with is a violation of freedom of speech by the CCP. He said it has undermined the security of Taiwan Telecom and freedom of speech, and he demanded that the Mainland China Committee and Ministry of Transportation have a thorough investigation and protest to the CCP. Lai stressed that, since the 17th, the interference happened either when the Nine Commentaries on the Communist Party or when the Chinese Forbidden News or commentary programs were broadcast. 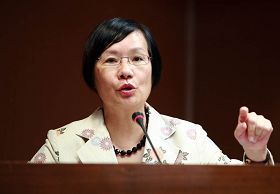 Another legislative council member, Luo Shulei, challenged the Minister of the Ministry for Transportation. She said that they should pay attention to NTDTV's case first.

The Legislative Council Transportation Committee invited Minister Mao Zhiguo to deliver a special report on the reconstruction after the "August 8th" flood. Ms. Luo Shulei challenged him and said that they should first pay attention to the NTDTV incident. She said that NTD APTV is a legal TV station in Taiwan, yet its broadcasts were blocked and its satellite was interfered with, and that China Telecom in Taiwan couldn't get to the bottom of it even though many days had already passed.

She stressed that the "Zhongxin No.1" satellite rented by China Telecom in Taiwan was also the one being used by the fire department and used in 365 counties and townships, as well as for disaster satellite telephones. They couldn't make any sense of why NTD APTV was blocked for so many days, and there was the possibility of the entire Taiwan Telecom being invaded.

Mao Zhiguo responded that he would carry out the investigation right away and report in writing to the committee.