(Clearwisdom.net) On October 17, Falun Gong practitioners from Sydney attended the annual Granny Smith Festival in Eastwood. This was the 9th time that they were invited to this festival. 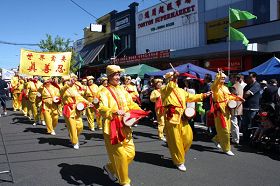 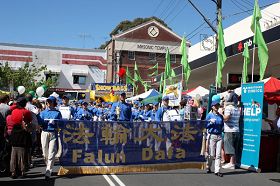 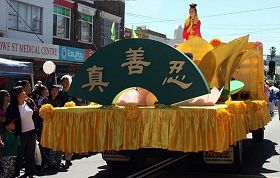 Almost 300 groups representing different cultures participated. They displayed their own food, products, and handcrafts. The organizers set up six stages for performances and held a fireworks show. More than a hundred thousand people attended the festival.

Falun Gong practitioners also took part in the festival parade. Their group consisted of four teams. The Divine Land Marching Band led the teams, and their performance attracted many spectators. After the band, practitioners performed a traditional Chinese fan dance. Then came a float decorated with golden lotus flowers. Practitioners demonstrated the exercises on the float. The last team was made up of the traditional waist drum players. 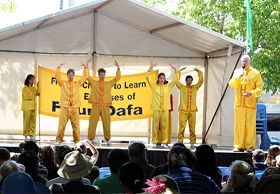 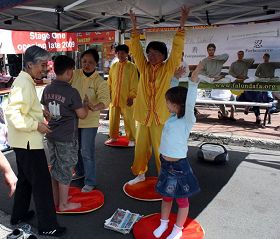 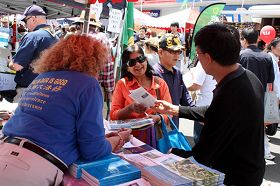 Practitioners demonstrated the exercises and performed dances on the largest stage. They also set up two booths, handing out informational materials and collecting signatures on a petition. They taught many people the exercises.

A Chinese gentleman told practitioners that he had been looking for Falun Gong. He is from China but was visiting Australia. He said: "I cannot find Falun Gong in China. I know it is good and the persecution is wrong." Practitioners told him about the movement to withdraw from the Chinese Communist Party. He was happy to quit. He learned the exercises and took a lot of truth-clarifying materials, including an exercise instruction video and a copy of the Nine Commentaries on the Communist Party.

Many Westerners said that they wanted to learn the exercises and asked for information about local exercise sites. Some of them felt the peaceful energy field.