Experience Sharing from a Young Practitioner in Beijing

(Clearwisdom.net) Greetings our esteemed Master! I wish you a happy mid-Autumn Festival! 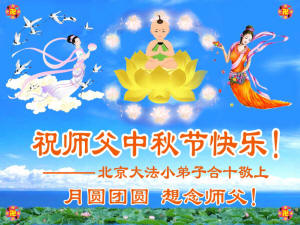 I am a young practitioner in Beijing. I am eight and a half years old, and I have practiced cultivation for six years. Today I'm writing this article to share my cultivation experience with Master and fellow practitioners.

In 2003, when I was two and a half years old, I started to study Zhuan Falun. I was not able to read so I listened to the tapes. When I was very little, grownups read Hong Yin to me, and I memorized the poems. I especially liked the poem "Assimilation and Consummation" in Hong Yin. Starting at four years old, my mom started reading Zhuan Falun to me, and I listened very carefully.

When I was about to go to school, my mom wanted me to read Zhuan Falun even though I could not read, and told me that Master would help me if I tried it conscientiously. Then I followed her advice and indeed I could read the book. Master indeed has helped me! Thank you Master!

When I was in the first grade, I copied Hong Yin every night after doing my homework. Even though I was able to read Zhuan Falun, I asked mom to watch and listen to me to make sure I did not read any characters wrong.

I often go with mom to clarify the truth. When mom is talking, I send righteous thoughts to eliminate all evil and let the person mom is talking to be saved.

In the first grade, the school officials made every student join the Young Pioneers, but I refused. My mom clarified the facts to my teacher and gave her some truth-clarification materials and a VCD of Shen Yun Performing Arts. My teacher learned the truth and quit the Communist Party and its affiliated associations. Her family did it too. But because my school is a key elementary school, my teacher was under pressure. Every Monday when the flag was raised, she gave me a red scarf to put it around my neck. I was afraid of her so I did not say no. But every time I felt bad and sad. Mom said I did bad things to her by not stopping her from doing wrong things because of my fear.

My righteous thoughts were not strong enough until the past summer. Now I am in the third grade and have a new teacher. She is very stern. But I have no fear anymore. In addition, I started to pay attention to sending forth righteous thoughts. At the school's opening ceremony, the inspecting teacher asked me, "Why didn't you wear the red scarf?" I said openly, "I did not join, so I don't wear it!" The inspecting teacher left without saying another word. My teacher never asked me about it either. When my classmates asked me about it, I said, "I did not join. I don't wear it."

My favorite thing to do is to distribute truth-clarification materials with my mom. I would take out copies and stick them carefully on the doors, one by one.

A few days ago, I went with my mom to a big market to distribute the truth-clarification materials to the vendors. When mom was talking to them, I put the materials down. On our way back, I gave a Shen Yun VCD to the bus attendant.

At home, I also help the grownups do many things for validating Dafa. I know how to burn Shen Yun VCDs. When I do it, I'm always very careful and conscientious, and use the lowest speed to make the highest quality CDs.

A few days ago, I had a bad fall while running and bruised my hand. I recalled Master's words, "When it's difficult to endure, you can endure it. When it's impossible to do, you can do it." (Zhuan Falun, Lecture Nine) so I got up quickly and continued to run. In the sitting meditation, when my legs are very painful, I also remember these words and endure.

I have shortcomings in my cultivation. For example, I lack the initiative for studying the Fa, and played computer games on the Internet behind my mom's back. I like to watch TV, and won't stop even when grownups try to stop me. When I played computer games, I liked those with fighting and killing in them. But every time I felt very disturbed afterwards, for I could feel a group of things moving around me even in my sleep, and that was why I often shouted in my sleep. I read a practitioner's article on Clearwisdom.net that said everything has a life in other dimensions, so I understood that when I killed in the games, I actually killed in other dimensions, and have thus created a lot of karma. So I stopped playing computer games.

This concludes my experience sharing. Thank you Master! Thank you fellow practitioner!