Promoting Withdrawals from the CCP in London's Chinatown (Photos)

(Clearwisdom.net) October 1, 2009, was the 60th anniversary of the Chinese Communist Party's (CCP) rise to power in China. The Service Center for Quitting the CCP in London held activities in London's Chinatown to give out copies of the Nine Commentaries on the Communist Party, to urge people to quit the CCP and its affiliated organizations (the Party, the Communist Youth League, and the Young Pioneers), and to support the 61 million Chinese people that have already renounced the CCP. The event aimed at promoting the news among local residents as well as tourists, encouraging more Chinese to withdraw from the CCP and appealing to people's consciences to support justice. 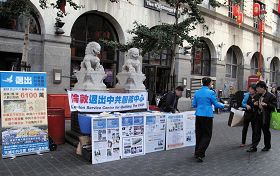 London Service Center for Quitting the CCP in Chinatown on October 1, 2009 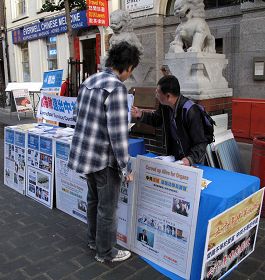 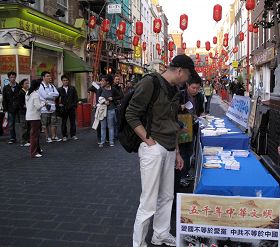 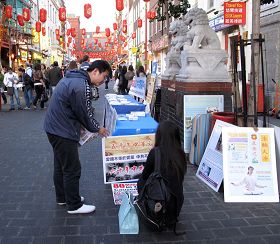 A Chinese girl learning the facts

People who visited Chinatown could not miss the information stand set up in front of the stone lions by the Service Center for Quitting the CCP in London. In front of the stand were poster boards in Chinese and English that exposed the CCP's atrocities during the past 60 years, including tragic photos of Falun Gong practitioners being tortured. A large collection of informational materials were laid out on the table, including literature about Falun Gong, the Nine Commentaries, and quitting the CCP leaflets and DVDs. The blue tablecloth on the information table alongside the blue and white banners and exhibits stood out in a sea of red lanterns.

Volunteers distributed informational materials to passersby and helped them to quit the CCP. They kept telling people one basic fact: for 60 years, ever since the CCP established power, it has ruled with lies and tyranny, destroying 5,000 years of traditional Chinese culture and inflicting suffering on ordinary Chinese people. The CCP has brutally persecuted Falun Gong practitioners, who follow the principles of Truthfulness-Compassion-Forbearance, for 10 years. If everyone were to quit, the CCP would disintegrate. Only when the CCP disintegrates will the Chinese nation have hope. That day, nearly 100 people quit the CCP.

In Chinatown, reactions to the facts were mixed. Compared to Westerners and Chinese from other countries and areas, mainland Chinese have been more severely brainwashed by the CCP . They did not easily accept the facts or choose to quit. Overseas Chinese, however, were more likely to respect religion and tradition and believed that good is rewarded and evil is punished.

Having read the information on the exhibits about the persecution of Falun Gong, an elderly Western gentleman said emotionally to a nearby practitioner, "I did not realize that the CCP was still this bad. I thought it had improved since the Olympics. Who would have thought it could still be this bad. I support you."

A Chinese man born in Japan, Yamakusa, has Chinese parents from Hong Kong. He inherited his beliefs from his parents. He could not understand why many young Chinese nowadays do not believe in the divine.

Many mainland Chinese did not refuse to acquaint themselves with the facts either. Passing by the information stand, some mainland youth paid attention to the poster boards that exposed the persecution of Falun Gong. When groups of Chinese tourists passed by, they stared at the information on quitting the CCP. Some Chinese students did not accept leaflets, but stood in small groups and viewed carefully the information and photos.

Among the youth who recently left China, there were also those that could accept the facts at once. Having learned the truth, one Chinese girl quit the CCP immediately. She took photos of each poster board and then took a sample of all the Chinese materials on the information stand.

“Germany: "Please Tell Everybody about the Crimes in China" ”