(Clearwisdom.net) On October 1-9, 2009, the 121st Olympic Session and the XIIIth Olympic Congress of the International Olympic Committee (IOC) were held in Copenhagen, Denmark. There were about 1200 sports delegates from around the world and an equal number of journalists gathered there. Falun Gong practitioners took this opportunity to introduce Falun Dafa (also known as Falun Gong), and expose the ten-year brutal persecution of Falun Gong by the Chinese Communist Party (CCP). 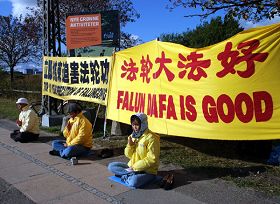 During the IOC Summit, Falun Gong practitioners raise awareness about Falun Dafa across from the entrance to the conference center 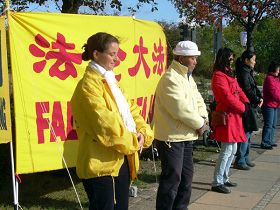 Practitioners demonstrating the Falun Gong exercises near the conference center 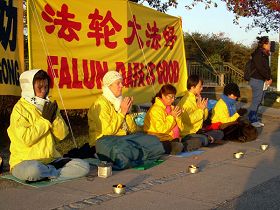 This was the first time Denmark has hosted such a world-class summit. Bella Center, the IOC 2009 Summit site, was fully safeguarded by the police, and the roads nearby were blocked. By explaining the facts to the Copenhagen Police chief, the Falun Gong group was granted an exception, and allowed to hold a protest across from the main entrance of Bella Center. As Falun Gong practitioners have a good reputation for their peaceful protests around the world, the chief constable in charge of summit security approved the permit for the Falun Gong group. "No groups allowed to gather/protest near Bella Center" was an agreement between Danish police, IOC headquarters in Switzerland, US security for President Obama's visit, and the Brazilian police.

On October 2, the hosting city for 2016 Olympic Games was chosen, with the contenders being Chicago (USA), Madrid (Spain), Tokyo (Japan), and Rio de Janeiro (Brazil). US President Obama, along with state leaders from the other three countries came in person to Bella Center in Copenhagen to try to win the right to host the 2016 Olympic Games.

In the morning on that day, the practitioners assembled opposite the main entrance of Bella Center. They erected banners reading "Falun Dafa is Great" and "Stop the Persecution of Falun Gong Immediately," and practiced the exercises quietly.

At about 10:00 a.m., President Obama finished his speech and was about to leave Bella Center. His motorcade came out from the gate and was facing the bright yellow banners displayed across the street, "Falun Dafa Is Good" and "Stop the Persecution of Falun Gong Immediately." The practitioners said, "President Obama may already know about Falun Gong. He is now in Denmark, a small remote Nordic country, and he can see Falun Gong practitioners presenting the same message during his short stay in Denmark of only four and a half hours. Perhaps someday everyone will realize the importance of this message."

At around 8:00 p.m. that evening, it had grown dark outside. As people were leaving Bella Center, after they had received the news that Brazil won the right to host the 2016 summer Olympic Games, they could still see the Falun Gong practitioners, who were holding a candlelight vigil to commemorate their fellow practitioners who lost their lives in the persecution.