Divine Performing Arts International Company staged the first of eight shows at the Pasadena Civic Auditorium in Los Angeles on the evening of December 30, 2008.

Among the audience were many artists, businessmen, scholars, and educators. They had high praise for the show. Jim Caviezel, the star of "Passion of the Christ", saw Divine Performing Arts in Pasadena, and said it was "Remarkable!" 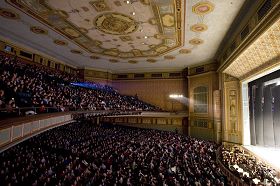 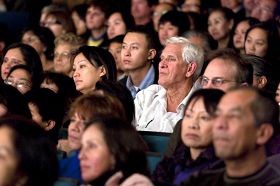 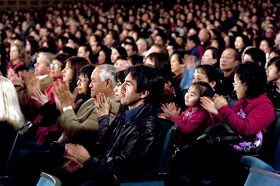 The audience at the DPA's premiere show in the Pasadena Civic Auditorium, Los Angeles

Well-known Writer and Director: This is reinvigoration of the spiritual tradition of China

Shean David Morton is a director, writer and publisher. His talk show program is broadcast on over 250 radio stations in the United States. He called the show "fantastic." He said, "I thought it was a great mixture of Chinese culture and dances and spirituality, and I think it will help to bring peace to the world, and reinvigorate the spiritual traditions of China." 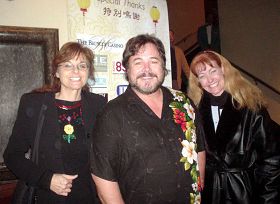 He said that he liked the Tibetan dance number "Dance of the Snow-Capped Mountain," and "Monk Ji Gong Abducts the Bride," in which Monk Ji Gong predicted a landslide and tried every means possible to help people escape the disaster. Mr. Morton believed, "Trying to bring heaven to earth, is balancing the intuitive tradition of the East and the logic and scientific tradition of the West, which is very much what our future will be about. The spiritual reinvigoration of China will help bring peace to China and to the world."

Mrs. Morton was delighted and said that she enjoyed everything in the show, from the costumes, the music to the colors, which were just superb.

Drama Teacher: The show was exquisitely produced and captivating 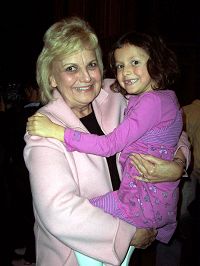 Barrie Kramer, drama teacher at a middle school in Massachusetts and her granddaughter

Barrie Kramer teaches drama in a middle school in Massachusetts. She came to visit her daughter in Los Angeles from Boston, and was fortunate enough to see the show. She said that she liked the show very much, which was not only entertaining, but also very valuable! During the intermission, she said excitedly that it was beyond her expectations, it was a fantastic show.

She said that she had never been to China, so it was an eye-opener for her to see the rich and beautiful traditional Chinese culture from the DPA show. It was a special show, with succinct rhythms, and was outstanding, beautiful and fascinating. Regardless of the costumes or dancers, they looked so pure and peaceful.

Professor Kramer said that it was her first time to see such a wonderful show, which was exquisitely produced. She was also impressed with the production of backdrops. She concluded by emphasizing that she loved the show very much. 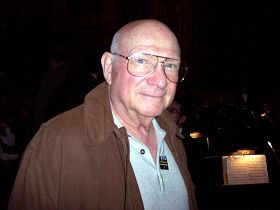 Speaking of the individual numbers, Mr. Hercher said that it was hard for him to say which was the best. He said that he appreciated the last dance number, "Dance of the Snow-Capped Mountain," and the singing of the tenor and the soprano. Though he did not understand the lyrics (in Chinese), he said it did not matter, because the music they sang and their high professional standards were the most important.

Raymond Scinouni, originally from France and in the import/export business, said that it was a "great show."

He liked the "combination of modern and traditional" in the performance "The Miraculous Exhibit," in which a modern day young man with a broken arm visits an exhibit of Falun Dafa, a traditional cultivation practice.

The Show Was Beautiful, Inspiring and Full of Spirituality

Dale Carney, a construction consultant, came to the show with two friends. During the intermission, he told the reporter excitedly that the show was outstanding. The costumes, the music, the stage setting, the tenor, and the piano accompaniment were all fantastic. He said that he should really recommend more people to come to see the show. 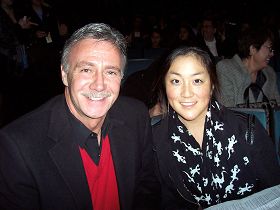 Dale Carney and his friend

He said that every part of the show was excellent, including stories and legends, as well as emphasis on the existence of gods and Buddhas. All this was beautiful and inspiring, and the entire show was full of spirituality.

Mr. Carney said that his favorite programs were "The Five Millennia Begin," and "The Monkey King Triumphs." He said that actually each and every program was excellent. As each has its own characteristics, it was hard to compare them.

Overseas Chinese: I did not expect to see such a wonderful and traditional show in the United States

Zheng Cunzhu, originally from China and living now in Los Angeles, missed the DPA show last year so he brought his whole family to the show this year. 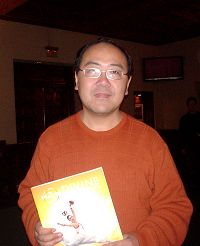 Mr. Zheng was deeply impressed. He said, "The tradition in China, honestly speaking, has lost a lot in the [past] 59 years. I did not expect to see such a wonderful show in the United States. It can reflect much of of the tradition in China. I believe that many Americans can feel the traditional Chinese culture and realize how broad and profound it is.

"Another number that depicts the persecution of Falun Gong is also touching. My wife was in tears while watching it. I consoled her at the time, saying that such a thing will not recur in China one day," he added.