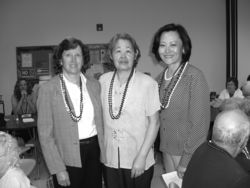 From left, Terry Jasewicz of Congressman Michael McNulty's office, Xiulan Li and her daughter, Leejun Taylor of Mayfield, are shown Friday at the Senior Citizens Service Center of Gloversville and Fulton County. The center hosted an event Friday celebrating Li's release from a Chinese detention center last year. She now lives in Gloversville.

The topic on Friday at the senior center in Gloversville was freedom.

Xiulan Li was honored with a flag presentation and a cake celebrating her freedom after her imprisonment last year in her native China. She now lives at Kingsboro Towers in Gloversville and participates in programs at the senior center.

Taylor said the international attention drawn by the Beijing Olympics did not change China's oppressive rule and its imprisonment of those who don't agree with the Communist regime's political stance.

Annie Li's mother is still in prison. Her phone calls to the prison have not gotten through to her mother, although she said her niece managed to see Li's mother Sept. 5, so she knows she was still alive on that date.

"It helps that I'm here," Annie Li (no relation to Xiulan Li) said of the international pressure which she said seems to be what China responds to.

But she said the situation remains dire: "My mother heard a 48-year-old neighbor tortured to death in a nearby cell."

Xiulan Li and Shizhen Qin were both imprisoned for the practice of Falun Gong, a combination spirit-mind-body tradition that sprang up in China in the 1990s. The practice has attracted millions of followers - and the ire of the Chinese government, which detains followers and attempts to "re-educate" them through brainwashing, deprivation and torture.

Xiulan Li, 75, credits the practice of Falun Gong for her good health. She says she no longer takes medication for high blood pressure and other maladies thanks to the practice, which includes exercise and mediation.

There was an emotional meeting between Jasewicz and Xiulan Li at the center, Director Catherine Mueller said, because this was the first time Li had met the representative of McNulty's office who helped speed Li's release from prison.

"When Mrs. Taylor called our office June 4, 2007, requesting help locating her mother, who had been picked up by police, our office went to the U.S. consul to locate her," Jasewicz said.

Translating an address her mother had written in Chinese, Taylor told the audience how pleased Li is to be living and practicing her beliefs in the U.S.

"I am happy I can now practice Falun Gong without fear," Taylor read as her mother looked on. "I was locked up for 36 days without [adequate] food or water or a bathroom. And even if [political prisoners] are tortured to death, police face no consequences."

Xiulan Li said there were more than 100,000 detained for political reasons in China. Besides followers of Falun Gong, she said, Christians and journalists also are imprisoned and persecuted by the Chinese government.

"Falun Gong is composed of meditation, exercises and tolerance," she said. "There is no organization. All books, lessons and exercises are free, and it has no political agenda except that torture should stop."

Jacewicz said that in her five years on McNulty's staff, Xiulan Li's was one of the most intense cases she has worked on. Li is a legal permanent resident of the U.S. If she had been a naturalized U.S. citizen, that status might have spared her the ordeal of detention in China.

"I was told by my congressional contact that legal permanent residents do not have the same protections that U.S. citizens have," Jasewicz said. "There was little hope of a good outcome."

She said she was overjoyed that she was wrong and Li was freed.

Besides a presentation of a flag from McNulty's office, a citation from the office of Assemblyman Marc Butler, R-Newport, was read honoring Li.