(Clearwisdom.net)The annual flower parade in Australia was once again held in Toowoomba, Queensland, on September 20, 2008. Queensland Falun Gong practitioners have been invited to take part in the annual parade since 1999, and this year they won the third place award. 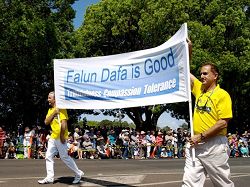 The Toowoomba Flower Parade symbolizes the arrival of spring. This year's event was on an even larger scale than in previous years, and it attracted tens of thousands of residents and tourists to come and watch. The governor of Queensland and local politicians also came out to see the parade.

The parade set off at midday sharp. Throngs of spectators gathered along the parade route. The Falun Dafa contingent had an impressive, large-scale lineup. The Sydney Divine Land Marching Band took the lead. Accompanied by rich and inspiring music, people saw a huge model of Zhuan Falun, a book that has benefited 100 million practitioners both physically and mentally. Behind the huge model, practitioners demonstrated the five sets of Falun Gong exercises. Dancing gracefully along behind were the "celestial maidens," practitioners dressed in Tang Dynasty costumes. The loud and inspiring waist drum troupe followed, displaying traditional and ancient Chinese culture. The practitioners' refreshing, peaceful, and pleasing lineup was highly appreciated by the spectators. During the march, organizers introduced Falun Dafa eight times through loudspeakers. At the awards ceremony, the Falun Dafa contingent received the third prize, and the award presenter invited the practitioners to take part in the 60th Anniversary Grand Parade next year.

During the parade, many Chinese tourists smiled when they saw the Falun Dafa contingent and took photos. An enthusiastic Western audience also kept applauding and cheering. One person said, "It's truly a peaceful group!" Another man commented, "How wonderful it would be if there were more Truthfulness-Compassion-Forbearance in the world."

Practitioner Emma-Kate Knezevic from Brisbane participated in the parade. She said, "I am participating in the Flower Parade to display the wonderfulness of Falun Dafa to the spectators. I'm honored to wear this Chinese costume to take part in the parade. This is so rewarding! The audience response was warm and positive. Many people saw us and showed their appreciation by applauding and smiling."

Ms. Knezevic continued by saying that she has benefited so much, both physically and mentally, from Falun Dafa. "I'm healthier than before and full of energy. In particular, my views on life have changed a quite a bit. Now I treat others with the principles of Truthfulness-Compassion-Forbearance. and I have quit drinking alcohol."

The parade concluded at Queen's Park. Practitioners remained in the park, though, demonstrating the Falun Gong exercises and introducing Falun Dafa to the many who gathered there. Many people walked up to have their photos taken with practitioners in costume and indicated that they looked forward to seeing such a wonderful group in the parade again next year.