Japan: Falun Dafa Practitioners Perform on Stage at a Festival in the Hometown of "Tora San" (Photos)

On September 13, 2008, Japan Falun Gong practitioners' Tianzi Dance Troupe and students of the Minghui School were invited to participate in the performance of the "Night Out" event at Taishakuten Temple, Shibamata Katsushika, Tokyo. 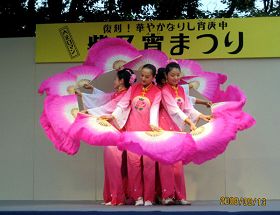 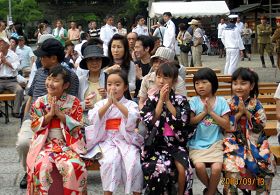 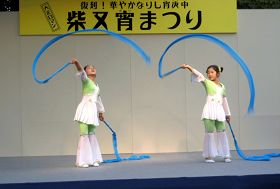 Though it is a remote and undeveloped area far from the center of Tokyo, because it is the hometown of the famous movie character "Tora San" in the 48-episode movie series It's Tough Being a Man, Shibamata Katsushika attracts a lot of visitors every year. Since 2008 is the 40th anniversary of the movie It's Tough Being a Man, more community activities were arranged to celebrate this popular movie series.

The evening show began at 6 p.m. The Tianzi Dance Troupe presented splendid dances and songs in the first 30 minutes and demonstrated Falun Gong exercise demonstration in between their song and dance performances. During the demonstration, practitioners introduced Falun Gong and informed the audience about the Chinese Communist Party's persecution of Falun Gong in both Chinese and Japanese.

After the exercise demonstration, a Japanese practitioner, Ms. Minako, sang the song "We Have a Predestined Relationship." Influenced by traditional Chinese culture and Buddhism, Japanese people believe in "predestined relationship." The audience seemed to appreciate the song and many waved their hands along with the rhythm. After that, young practitioners from the Minghui School performed a ribbon dance called "Sound of Hope." The audience was delighted.

At the end of the 30-minute performance, all of the performers sang a song called "Coming For You" in both Chinese and Japanese language. The audience gave them long and enthusiastic applause. Shortly after the performances, the organizers sent the group an email and expressed their appreciation.