(Clearwisdom.net) On September 13, 2008, the 48th annual Green Tree Festival celebration was held in Kirkwood, Missouri. Falun Gong practitioners participated in the Green Tree parade as they did in previous years, and were warmly received by festival-goers. 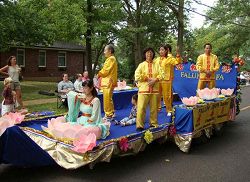 Practitioners demonstrate the exercises on the float

When practitioners decorated the float, one of the parade organizers, Marilyn, had a conversation with them. She said that she had learned about the persecution of Falun Gong; and that the Chinese Communist regime was using the Olympics as an excuse to intensify the persecution. She said that China is short of basic human rights, and the Olympics has not brought any good changes to the Chinese people. People do not have the freedom of expression in China.

The Falun Gong float was met with applause and cheers along the parade route. Festival-goers on both sides of the road smiled and watched the float pass by. More and more people have come to learn about Falun Gong, and understand the brutal insanity of the persecution.

“Japan: Falun Dafa Practitioners Perform on Stage at a Festival in the Hometown of "Tora San" (Photos)”