Ms. Zhou Haitao Suffers a Mental Collapse from Torture After Her Husband Was Killed in the Persecution (Photo)

(Clearwisdom.net) Falun Gong practitioner Ms. Zhou Haitao, about 45-years-old, was an employee of Yinhe Cotton Works in Wucheng County, Shangdong Province. Her husband, Mr. Chen Guibin was severely beaten by four security guards of Yinhe Cotton Works. He passed away on February 7, 2001 (Clearwisdom.net http://www.clearwisdom.net/emh/articles/2001/3/18/5695.html). Ms. Zhou was a capable and intelligent person before the persecution led her to suffer a mental collapse, making her unable to take care of her young child. 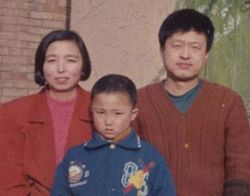 Chen Guibin and Zhou Haitao had a harmonious family.

Three months of abuse caused Ms. Zhou to suffer a mental collapse. Later, the police officers sent Ms. Zhou to Shangdong Province Forced Labor Camp. She endured the brainwashing for five months. After she was released and sent home, her mental state deteriorated. She often felt cold, had nightmares, and talked to herself. Later, her family sent Ms. Zhou to a mental hospital for treatment. After she returned home, she suffered another breakdown, grew depressed and tried to kill herself. Luckily someone stopped her.

The persecution Ms. Zhou Haitao suffered drove her insane. She always stays at home by herself, stays in bed, and has become a mere skeleton.

A harmonious family was broken apart by the Chinese Communist Party's persecution: Mr. Chen Guibin was killed and his wife was driven insane. A family has been destroyed by the CCP for believing in Truthfulness-Compassion-Forbearance.

“Police Harassment Leads to the Death of an Elderly Practitioner”