(Clearwisdom.net) On August 21, 2008, the Queensland station of New Tang Dynasty TV (NTDTV) held a rally on Brisbane Square in downtown Brisbane and urged Eutelsat, the European satellite company, to restore NTDTV's signal to China. Many local people expressed their concern over Eutelsat's shutting down the NTDTV signal. 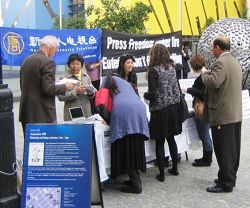 The event started at noon during lunch time, while many people were out on the street. Many stopped at the rally site, drawn by the banners and posters. Twenty people agreed to be interviewed on NTDTV, expressing their concern about the issue. Those interviewed included a bank employee, university students, teachers, members of trade unions, a computer engineer, sales representatives, a nurse, and tourists.

A sales manager from India said, "NTDTV pays attention to China's human rights and must have the right to broadcast. The Eutelsat issue [of shutting down NTDTV'S signal] is not due to technical reasons, but is a money game. Thus it must be solved immediately. I give my best wishes to NTDTV."

The rally lasted over two hours. About 2,500 flyers were distributed. Many people came forward to sign the petition to support NTDTV. Some said they would write to the CEO of Eutelsat to urge him to restore NTDTV's broadcast to China.

“New York: Divine Performing Arts Plays to a Full House in Manhattan and Receives an Enthusiastic Response from the Audience (Photos) ”