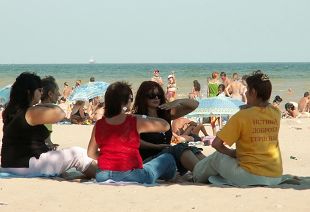 People learn the Falun Gong exercises on a beach in Mariupol

This was the first time the practitioners had held an activity in this city. On Sunday, when practitioners arrived at the park, they discovered that there were few people around. Instead, a group of police greeted them. During the dialogue with the police, the practitioners felt that these policemen didn't know much about Falun Gong and were a bit suspicious. Practitioners gave each policeman informational materials about Falun Gong and politely talked to them about the brutal persecution innocent Falun Gong practitioners have been suffering in China. When the police heard that in today's China a group of kind people who follow the principles of Truthfulness, Compassion and Forbearance have been brutally persecuted by the Chinese Communist regime, they were all very shocked and immediately changed their attitude. They told practitioners in a very friendly way: "There are not many people in this park. If you want to let more people know the truth, you have to find a place with many people. There is a beach in this city that is very crowded. We can take you there. Every Sunday there are always lots of people from different cities who relax and see the sights there." Then the police directed practitioners by car to the crowded beach.

Practitioners chose the entrance to the beach to set up their display boards and banners. A few practitioners demonstrated the Falun Gong exercises while others distributed leaflets. Within two hours all four thousand leaflets were gone. When practitioners did the fifth sitting meditation on the beach, it attracted many people who wanted to learn the exercises.

On this day, with the help of the police, many Ukrainian people learned the truth about Falun Gong.

“Times Union: A Quest for Freedom Spans the Oceans”