On August 15, Falun Gong practitioners in Kansas City held a press conference, calling upon the American government, the media and the public to pay attention to the intensified persecution against Falun Gong during the Olympics, and help rescue two Falun Gong practitioners, Cao Junping and her husband, Pang Xiaoqian in Weifang. They are the parents of Pang Jin, a student at Missouri State University. 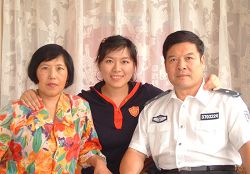 Pang Jin and her parents in August, 2007

At the press conference, Pang Jin said that the Chinese Communist Party is using the Olympics as an excuse to arrest Falun Gong practitioners. Her parents' house in Weifang, Shandong Province, was searched. Her parents were forced to leave home and later were illegally arrested. Pang called upon the American government to help rescue them.