On August 17, Falun Gong practitioners from Boston attended a celebration of the Mid-Autumn Festival in Chinatown. Practitioners set up a booth and demonstrated the exercises. They collected the signatures opposing the persecution and clarified the truth about the persecution. 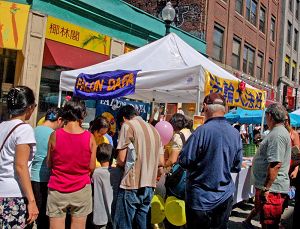 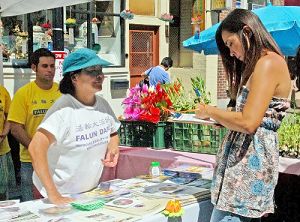 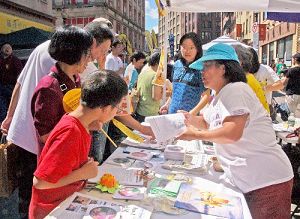 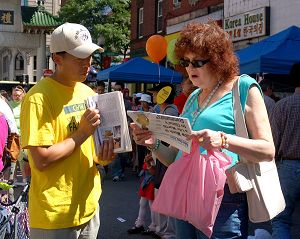 A Western couple told practitioners that they learned the first set of exercises online. He felt a strong energy flowing in his body. He was amazed that doing the first exercise could refresh him after work. They said that they would go to the exercise site to learn all five sets of exercises.

A young man from China learned the truth about Falun Gong from practitioners. He said to practitioners: "You are all good people. I saw the Divine Performing Arts' gala this year. It was wonderful. I will go to the gala next year again."

Two Chinese people tried to interfere with practitioners in the morning, but practitioners calmly clarified the truth to them. In the afternoon, they watched practitioners doing the exercises without making any noise. At the end of the event, they came back to the practitioners' booth and asked them for more details about Falun Gong. Before they left, they took some truth-clarifying materials and a copy of the Nine Commentaries on the Communist Party.